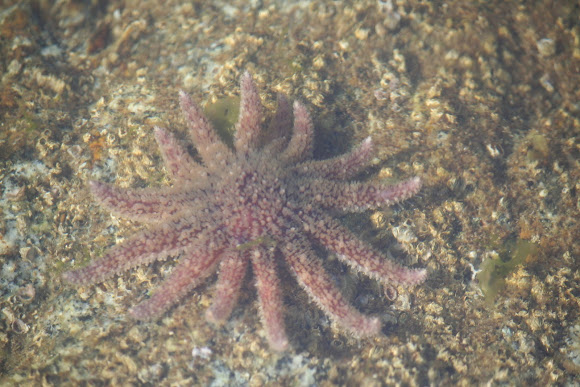 The sunflower sea star (Pycnopodia helianthoides) is a large predatory sea star usually with 16–24 limbs called rays[citation needed]. It is the largest sea star in the world. Sunflower sea stars can grow to have an arm span of 1 metre (3 ft 3 in) in diameter. The color of the sunflower sea star ranges from bright orange, yellow and red to brown and sometimes to purple, with soft, velvet-textured bodies and 16–24 arms with powerful suckers. Most sea star species have a mesh-like skeleton that protects their internal organs. Easily stressed by predators such as large fish and other sea stars, they can shed arms to escape, which will grow back within a few weeks. They are preyed upon by the king crab.