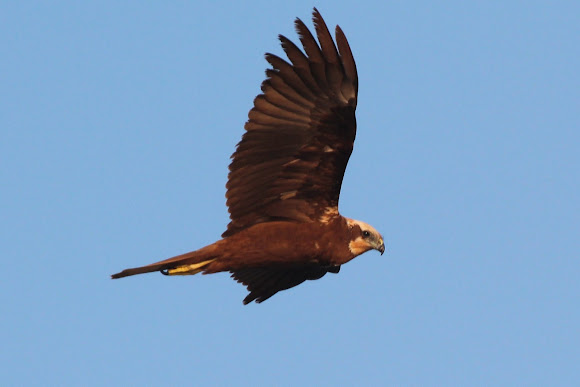 It is a large, bulky harrier with fairly broad wings, and has a strong and peculiar sexual dichromatism. The male's plumage is mostly a cryptic reddish-brown with lighter yellowish streaks, which are particularly prominent on the breast. The head and shoulders are mostly pale greyish-yellowish. The upperside and underside of the wing look similar, though the brown is lighter on the underwing. Whether from the side or below, flying males appear characteristically three-colored brown-grey-black. The female is almost entirely chocolate-brown. The top of the head, the throat and the shoulders have of a conspicuously lighter yellowish colour. But the eye area of the female is always darker, making the light eye stand out, while the male's head is altogether not very contrastingly colored and the female lacks the grey wing-patch and tail. Juveniles are similar to females, but usually have less yellow, particularly on the shoulders. It feeds particularly on small mammals, birds, insects, squamates, amphibians, fish and carrion-Wikipedia.org

Seen near a river.

The first one is a female and the rest is a male.

Thanks Yogesh. Need to check if this is a Juvenile or if there is a difference in plumage in two different regions.

Uploaded a clearer pic from a recent spotting at Nalsarovar bird sanctuary.