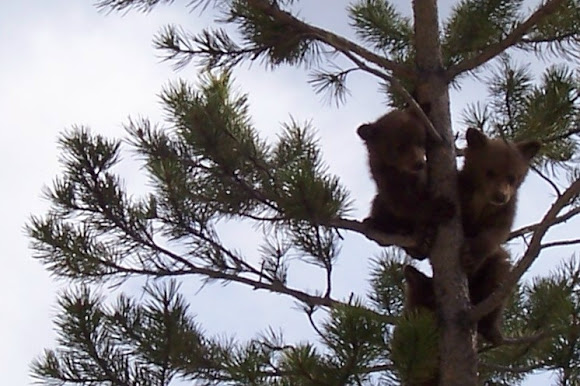 A medium-sized bear native to North America. It is the continent's smallest and most common bear species. This is a subspecies found in California. The breeding period usually occurs in the June–July period, though it can extend to August in the species' northern range. The breeding period lasts for 2–3 weeks. Sows tend to be short tempered with their mates after copulating. The gestation period lasts 235 days, and litters are usually born in late January to early February. Litters usually consist of two cubs, though litters of 6 have been recorded. At birth, cubs weigh 10–16 ounces (280–450 g), and measure 8 inches in length. They are born with fine, gray, downlike hair, and their hind quarters are underdeveloped. They typically open their eyes after 28–40 days, and begin walking after 5 weeks. Cubs are dependent on their mother's milk for 30 weeks, and will reach independence at 16–18 months. At the age of six weeks, they attain 2 lb, by 8 weeks they reach 5 lb and by the age of 6 months they weigh 40–60 lb. They reach sexual maturity at the age of three years, and attain their full growth at 5 years.[31]

mountain ranges of southern California, north through the Central Valley to southern Oregon

I've only seen a cub once