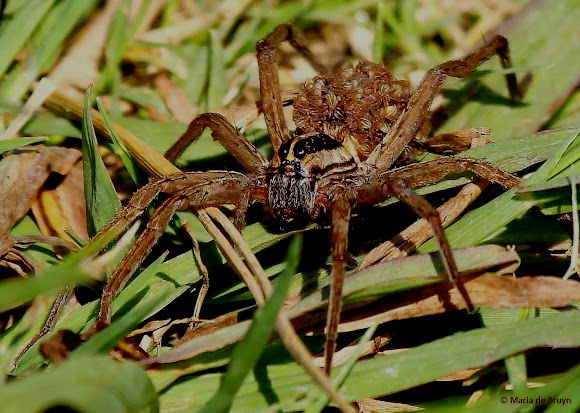 Two of the Wolf spider's eight eyes are large and prominent, which distinguishes them from the Nursery web spiders whose eyes are all of approximately equal size. Wolf spiders are unique in the way that they carry their eggs. The egg sac, a round silken globe, is attached to the spinnerets at the end of the abdomen, allowing the spider to carry her unborn young with her. The abdomen must be held in a raised position to keep the egg case from dragging on the ground, however despite this handicap they are still capable of hunting. Another aspect unique to wolf spiders is their method of infant care. Immediately after the spiderlings emerge from their protective silken case, they clamber up their mother's legs and crowd onto her abdomen.

Throughout the United States and southern Canada. Terrestrial, but will burrow to some extent

Workers at the Mason Farm Biological Preserve were doing a controlled burn of part of the preserve and this spider was crossing to a section not being burned. She was carrying her babies on her back.

OK sorry, just read the full title of the mission

To Karen:
are spiders considered as insects for the above mentioned mission or is it really an arthropod mission?

Great capture!
Please consider adding this to the Brooding Behavior in Insects mission.

what a great spot