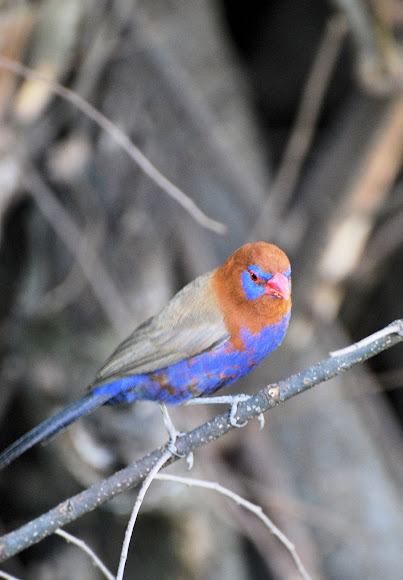 A Purple Grenadier spotted in Masai Mara, Kenya. The length averages 13.3 cm (5.25 in). All ages and sexes have a black tail, and adults have a red bill. The male has a cinnamon-coloured head and neck with a blue patch surrounding the eye. The rump is purplish blue and the underparts are violet-blue with variable rufous patches. The female is smaller and mostly cinnamon brown with white barring on the underparts and silver-blue eyepatches. Juveniles are like females, but mostly unbarred tawny-brown with a reddish-brown bill. The song (in Kenya) is described as "a high, thin chit-cheet tsereea-ee-ee tsit-tsit, or cheerer cheet tsee-tsee sur-chit."