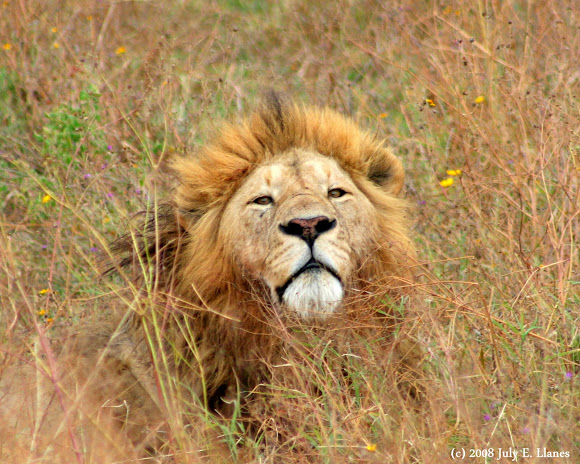 The lion (Panthera leo) is one of the four big cats in the genus Panthera, and a member of the family Felidae. With some males exceeding 250 kg (550 lb) in weight,[4] it is the second-largest living cat after the tiger. The lion is the tallest (at the shoulder) of all living cats, averaging about 14 cm (5.5 in) taller than the tiger. Behind only the tiger, the lion is the second largest living felid in length and weight. Its skull is very similar to that of the tiger, although the frontal region is usually more depressed and flattened, with a slightly shorter postorbital region. The lion's skull has broader nasal openings than the tiger.

The Ngorongoro Crater has the densest known population of lions, numbering 62 in 2001. The crater, which formed when a giant volcano exploded and collapsed on itself some two to three million years ago, is 610 m (2,000 ft) deep and its floor covers 260 km2 (100 sq mi).[5] Estimates of the height of the original volcano range from fifteen to nineteen thousand feet (4500 to 5800 metres) high.[8][9] A side effect of this enclosure is that the population of Ngorongoro lions is significantly inbred, with many genetic problems passed from generation to generation. This is due to the very small amount of new bloodlines that enter the local gene pool, as very few migrating male lions enter the crater from the outside. Those who do enter the crater are often prevented from contributing to the gene pool by the crater's male lions, who, because of their large size (the result of an abundant and constant food source), easily expel any outside competitors.

We were very lucky and the first day in the Ngnorongoro Crater we spotted a pride of lions eating a zebra. They were right by our truck and it was one of the most amazing things I have ever seen.

Thank you!
Sachin, just reloaded, thanks!

Lovely photos July! The first one is gorgeous!
You should consider adding this to the African Cats mission http://www.projectnoah.org/missions/7973...