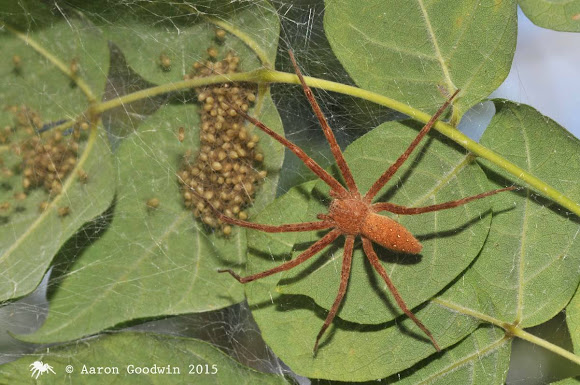 Pisaurina mira is a species of spider in the family Pisauridae, the members of which are commonly called "nursery web spiders." They are similar to wolf spiders (Lycosidae) and to the long-legged water spiders (Trechaleidae). The best way to distinguish the Pisauridae from other Families is by observing their eye patterns. Like other members of the Pisauridae, Pisaurina mira carries its eggs along with it in a sac that is secured both by a thread of silk linking it to the spider's spinnerets and by being held by the spider's chelicerae. When the eggs are nearly ready to hatch the mother will build a nursery web within which the egg sac is then hung. After they hatch, and until they undergo their first molt, the infant spiders will inhabit the rather large volume enclosed by this nursery web. The mother spider will station herself nearby in order to defend the nursery. (information from Wikipedia)

This female was protecting her brood.