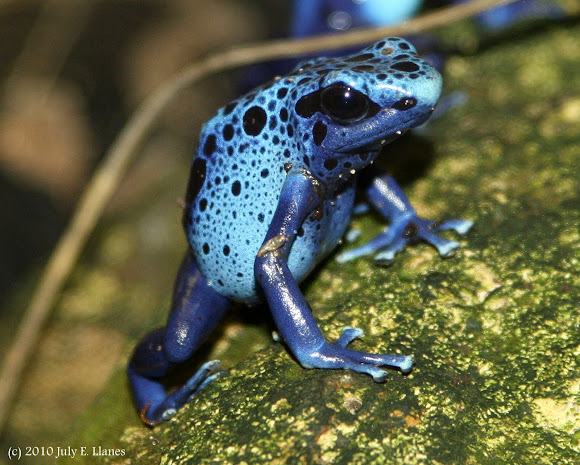 Most species of poison dart frogs are small, sometimes less than 1.5 centimetres (0.59 in) in adult length, although a few grow up to 6 centimetres (2.4 in) in length. They weigh about 2 grams, depending on the size of the frog. Most poison dart frogs are brightly colored, displaying aposematic patterns to warn potential predators. Their bright coloration is associated with their toxicity and levels of alkaloids. Frogs like the ones of Dendrobates species have high levels of alkaloids, whereas the Colostethus species are cryptically colored and are nontoxic.[5] When born and raised in captivity, poison frogs do not produce the skin toxins which they attain in their native habitats.[6]

I love this photo so much and shared this at my FB nature group because this week is BLUE week!

Thanks PattyC! :) I have been real busy but soon I will take more time and post some more. :) I'm very happy to be able to share my pictures with such a wonderful community here at Project Noah.

Great spotting and picture; all your pictures are great