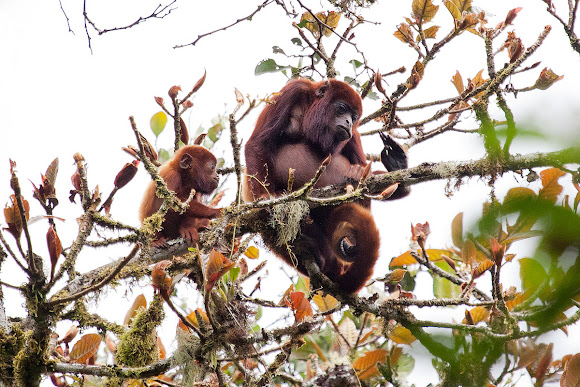 - They are arboreal and diurnal, and spends much of their time up high in the canopy.

- The females are extremely gentle with the little ones, and just as them, the male red howlers also allow the infants to climb all over them.

- Although several other Alouatta species are endangered, Alouatta seniculus has no special conservation status. However, red howlers have become rarer in some areas, most likely due to the destruction of their habitat.

It is found in the western Amazon Basin in Colombia, Venezuela, Ecuador, Peru, Bolivia and Brazil. They inhabit primarily lowland rainforest, dry deciduous forest, Andean cloud forest (including oak forest) and gallery forest in the eastern plains. In Colombia it is present throughout the country, except in non-forested areas and mountainous regions above about 3,000 m above sea level.

They were spotted in the Otún-Quimbaya Flora and Fauna Sanctuary. I was really really lucky to get to see them, both male and female and their little son. Wish I could share more photos of them, it was fantastic!

Oh yes Craig, I said why not, let's give it a try!

Ooh, you moved it. Great, I LOVE this photo!

These are wonderful Carolina! For me, the last one should be first, it's really beautiful!

I heard these guys are loud. ;D
Nice spotting, Carolina!

Great series Carolina, especially with the little one! The coat colour is beautiful, quite different from the mantled howler.