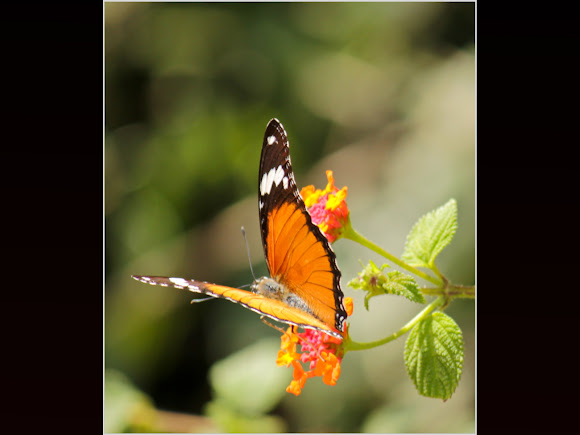 It is a medium-sized, non-edible butterfly, with a wingspan of about 7–8 cm. The body is black with many white spots. The wings are tawny the upper side being brighter and richer than the underside. The apical half of the fore wing is black with a white band. The hind wing has 3 black spots around the center. The hind wing has a thin border of black enclosing a series of semicircular white spots.

Is a common butterfly which is widespread in Asia and Africa. The Plain Tiger can be considered the archetypical danaine of India. Accordingly, this species has been studied in greater detail than other members of its subfamily occurring in India.

The Plain Tiger is believed to be one of the first butterflies to be used in art. A 3500 year old Egyptian fresco in Luxor features the oldest illustration of this species.

WOW Martinl, thanks a lot, its so tricky with nature really, and butterflies in particular i guess, one has to look real close and carefully, will make the change.
Cheers!

This is a female danaid eggfly (Hypolinmas missipus). http://en.wikipedia.org/wiki/File:Danaid... It imitates the plain tiger (Danaus chrysippus ) very accurately http://www.projectnoah.org/spottings/691... and confuses us nature lovers regularly.
You will notice that the marginal edge of the hindwing is scalloped while the Danaus is smooth. Also the hindwing has a different pattern of black dots. Ffinally, the wing vein pattern is different. Danaus has a closed central cell while Hypolimnas have no central cell.