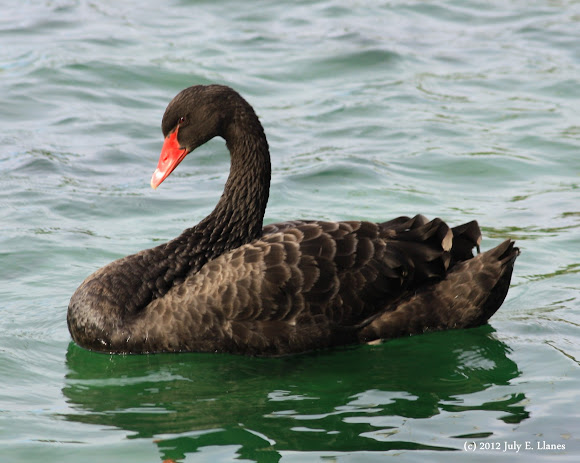 Black Swans are primarily black-feathered birds, with white flight feathers. The bill is bright red, with a pale bar and tip; and legs and feet are greyish-black. Cobs (males) are slightly larger than pens (females), with a longer and straighter bill. Cygnets (immature birds) are a greyish-brown with pale-edged feathers.[2] A mature Black Swan measures between 110 and 142 centimetres (43 and 56 in) in length and weighs 3.7–9 kilograms (8.2–20 lb). Its wing span is between 1.6 and 2 metres (5.2 and 6.6 ft).[2][3] The neck is long (relatively the longest neck among the swans) and curved in an "S"-shape. The Black Swan utters a musical and far reaching bugle-like sound, called either on the water or in flight, as well as a range of softer crooning notes. It can also whistle, especially when disturbed while breeding and nesting.[2][4] When swimming, Black Swans hold their necks arched or erect, and often carry their feathers or wings raised in an aggressive display. In flight, a wedge of Black Swans will form as a line or a V, with the individual birds flying strongly with undulating long necks, making whistling sounds with their wings and baying, bugling or trumpeting calls.[2] The Black Swan is unlike any other Australian bird, although in poor light and at long range it may be confused with a Magpie Goose in flight. However, the Black Swan can be distinguished by its much longer neck and slower wing beat.[5]