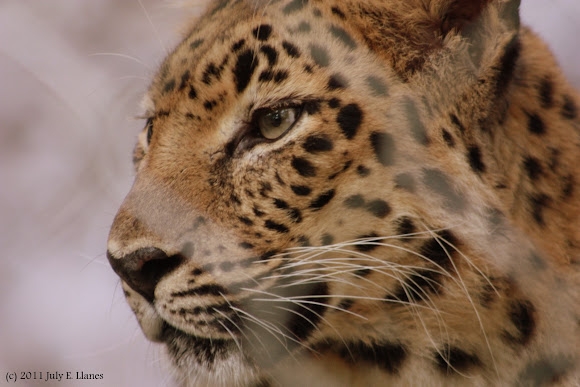 The Amur leopard is considered to be one of the most critically endangered big cats in the world, with just 35 remaining in the wild, all in the Russian Far East (3). It is one of ten living subspecies of leopard (according to the most recent genetic study) but it is especially distinctive due to a particularly pale coat compared to most other subspecies, and dark rosettes which are large and widely spaced with thick, unbroken rings (2). This beautiful leopard is well adapted to living in the harsh, cold climates of its range, with a thick coat that can grow as long as 7 cm in winter (4). Leopards give a distinctive rasping call, rather than a growl, as their main vocalisation (3).

Seen at the Central Florida Zoo

What a beautiful portrait July!