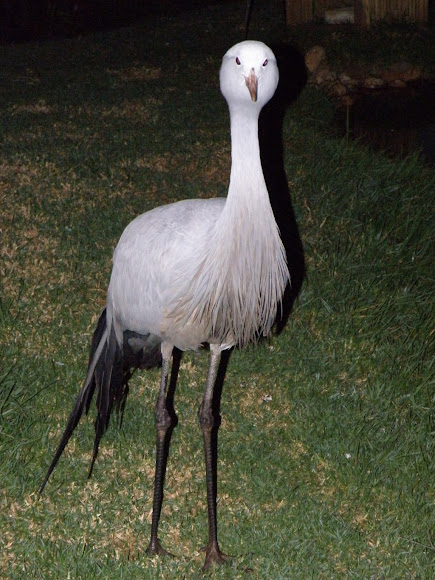 Blue Crane or Paradise Crane is the national bird of South Africa. It is a tall, ground-dwelling bird of the crane family which stands a little over a metre high and is pale blue-gray in colour with a white crown, a pink bill, and long, dark dark gray wingtip feathers which trail to the ground. Most cranes have red patches of skin on their heads that are used in display. The blue crane does not have these bare patches, but instead has head feathers that can be erected when excited or during aggressive encounters (6). This species produces loud honking calls typical of cranes

Blue Cranes are birds of the dry, grassy uplands which feed on seeds and insects and spend little time in wetlands. They are altitudinal migrants, generally nesting in the upper grasslands and moving down to lower altitudes for winter. Many occupy agricultural areas. Of the 15 species of crane, the Blue Crane has the most restricted distribution of all. While it remains common in parts of its historic range, and between 10,000 and 20,000 birds remain, it began a sudden population decline from around 1980 and is now classified as critically endangered. The primary causes of the sudden decline of the Blue Crane are human population growth, the conversion of grasslands into commercial tree plantations, and poisoning: deliberate (to protect crops) or accidental (baits intended for other species, and as a side-effect of crop dusting. The South African government has stepped up legal protection for the Blue Crane

What a wonderfully elegant bird!