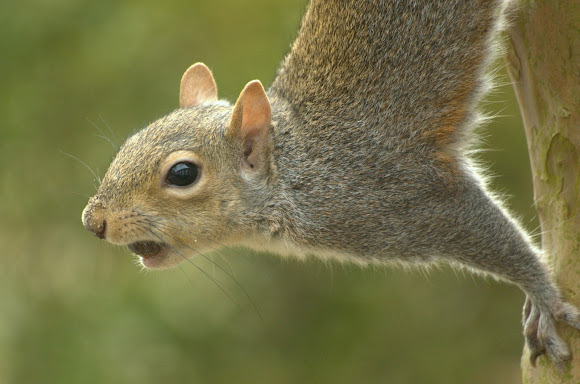 As the name suggests, the eastern gray squirrel has predominantly gray fur but it can have a brownish color. It has a white underside and a large bushy tail. Particularly in urban situations where the risk of predation is reduced, both white- and black-colored individuals are quite often found. The melanistic form, which is almost entirely black, is predominant in certain populations and in certain geographic areas, such as in large parts of southeastern Canada. There are also genetic variations within these, including individuals with black tails and black colored squirrels with white tails.

I had no idea! Thanks for letting me know! :)

You did know it's national squirrel appreciation day, didn't you?:)

Thanks. There are a couple feeders in this tree, but he never attempts to eat from them. He's happy with the food he has. :)

Awesome! He's hanging on tight to that nut!