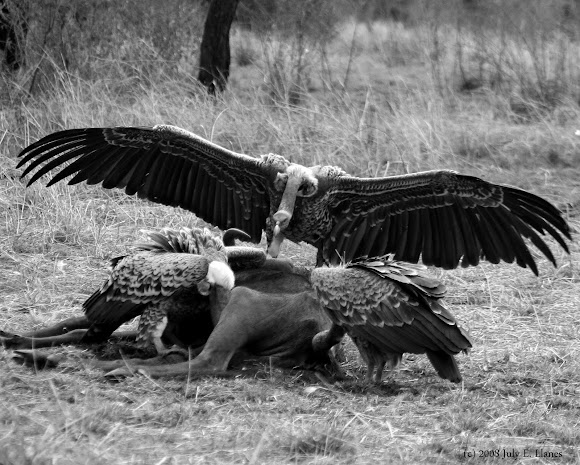 The White-backed Vulture is a typical vulture, with only down feathers on the head and neck, very broad wings and short tail feathers. It has a white neck ruff. The adult’s whitish back contrasts with the otherwise dark plumage. Juveniles are largely dark. This is a medium-sized vulture; its body mass is 4.2 to 7.2 kilograms (9.3–16 lb), it is 78 to 98 cm (31 to 39 in) long and has a 1.96 to 2.25 m (6 to 7 ft) wingspan.[2][3][4] White-backed Vulture, Gyps africanus Gyps africanus Like other vultures it is a scavenger, feeding mostly from carcasses of animals which it finds by soaring over savannah. It also takes scraps from human habitations. It often moves in flocks. It breeds in trees on the savannah of west and east Africa, laying one egg. The population is mostly resident. As it is rarer than previously believed, its conservation status was reassessed from Least Concern to Near Threatened in the 2007 IUCN Red List.[5]

They are eating a Wildebeest!

Congratulations! Your photo was selected for use in todays' blog on Vultures!
http://blog.projectnoah.org/post/3513328...

I like how the guy in the back is unconcerned about the display of "who's stronger" is going on in front of him. Fantastic spotting!

Thank you all! It makes me so happy to be able to share my photos and love for nature in such a productive way. I have to admit, I am learning a lot, I always take pictures of animals/plants I like but don't really know what species they are...until now. :)

This series is pure art!

Thank you so much for the nice comments! I have a series of pictures were the vultures start fighting each other, but I have been having problems uploading. Will try again tomorrow! :)

Great spot. What a wonderful creature they are. Such an important role, they play in our ecosystem. Thanks for the great write up. It is much appreciated that you took to time to describe the vulture. Education is important to their protection.

Wow! The wingspan is fantastic on this shot!