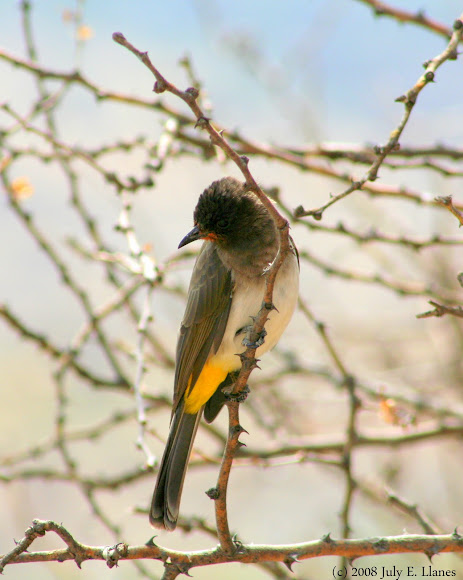 The bill is fairly short and straight. The bill, legs and feet are black and the eye is dark brown with a dark eye-ring, which is not readily visible. The Dark-capped Bulbul is mostly greyish-brown above and whitish-brown below, with a distinctive dark head and pointy crest on top of the head. The back of the head merges into the brown of the back, and the chin is also blackish. The underparts are grey-brown apart from white around the vent (yellow in P. (b.) tricolor). It is about 18 cm in length, with a long tail. It has a dark brown head and upperparts. Sexes are similar in plumage.

It is a common resident breeder in much of Africa. It is found in woodland, coastal bush, forest edges, riverine bush, montane scrub and in mixed farming habitats. It is also found in exotic thickets, gardens and parks. This species nests throughout the year in the most tropics, elsewhere it is a more seasonal breeder with a peak in breeding co-inciding with the onset of the rainy season. The nest is fairly rigid, thick walled and cup-shaped. It is situated inside the leafy foliage of a small tree or shrub.