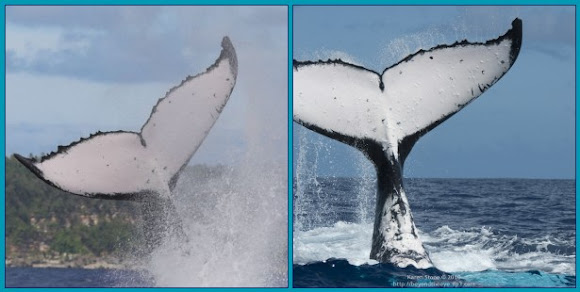 Allied Whale http://www.coa.edu/html/nahc.htm is expanding their Southern Ocean's catalog and I am their link with flickr. I trolling through the thousands of great fluke photos taken by "ordinary tourist" and uploaded to flickr... buried treasures... that can be found in a search. Thanks to two flickr members I made this match. The photo on the left was taken in 2004 by Scott Portelli http://www.flickr.com/photos/scottyporte... and the one on the right was taken by Karen Stone http://www.flickr.com/photos/karenvarnde... in 2010! Six years apart! So this particular whale returned years later! Created with <a href="http://bighugelabs.com" rel="nofollow">fd's Flickr Toys</a>

That is just amazing! Great work!

Lovely fluke pictures; I always thought whale fluking to be a nice way of saying "goodbye", at least for a while...
The quotations that make reference to your saying in PN's blog provide an interesting - and important - point of view too. Greetings

Thanks all.... just goes to show how important "citizen science is". If you take fluke photo, especially in the southern oceans, please let me know.
http://www.flickr.com/photos/flukematche...

Must have been amazing to see this.

Samantha it is indeed fantastic. Now we just need to find where this whale goes to feed. Tonga is its mating and birthing ground, it most likely goes to waters around the Antartic to feed. Hope people touring or working in the Antarctic will keep an eye out for him/her and send a fluke photo if they find her.

Thanks!! it was so exciting to make the match and know this whale return to Tonga at least once.