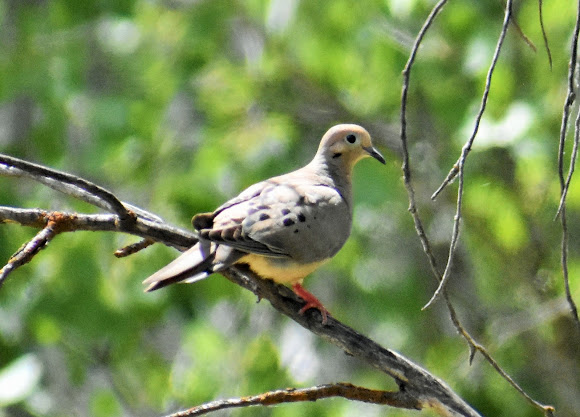 The Mourning Dove is the most slender of Washington's pigeons and doves. It has a long tail that tapers to a point. Its plumage is brownish gray with a buff-colored belly and wings of light gray. The beak is black, and the legs are orange. Adults have black spots on their wings and a slight iridescence at the nape of the neck. The black eye is surrounded by a light blue eye-ring. Juveniles look much like adults, but their plumage is lightly mottled.

Spotted near the Umtanum creek in the Cascade foothills. Mourning Doves are found in a variety of habitats where open areas and forests meet. They are common in suburban environments and along roadsides, both of which traditionally provide edge habitat. They adapt well to human habitation and thrive in grain-producing fields of eastern Washington.

In warm climates, the Mourning Dove is a prolific breeder, producing up to six broods per year, more broods than any other native North American species. In the Pacific Northwest, it has been reported that as many as three broods have been produced in a single season by a single pair.