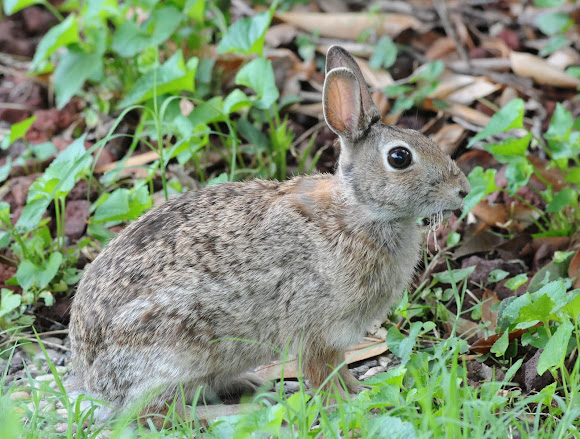 The eastern cottontail is chunky red-brown or gray-brown in appearance with large hind feet, long ears and a short fluffy white tail. Its underside fur is white. There is a rusty patch on the tail. Its appearance differs from that of a hare in that it has a brownish-gray coloring around the head and neck. The body is lighter color with a white underside on the tail. It has large brown eyes and large ears to see and listen for danger. In winter the cottontail's pelage is more gray than brown. The kits develop the same coloring after a few weeks, but they also have a white blaze that goes down their forehead; this marking eventually disappears. The average adult weighs about 1.1 to 1.8 kg (2 to 4 lbs); however, the female tends to be heavier.

We have several rabbits in the neighborhood, and they hang out frequently in our front yard because we have plenty of shrubs for cover, bird seed from the feeder to eat, and the dogs only have access to the backyard. This particular rabbit found its way into the backyard, so I photographed it for a while as it snacked and then gently chased it off so I could let the dogs outside.