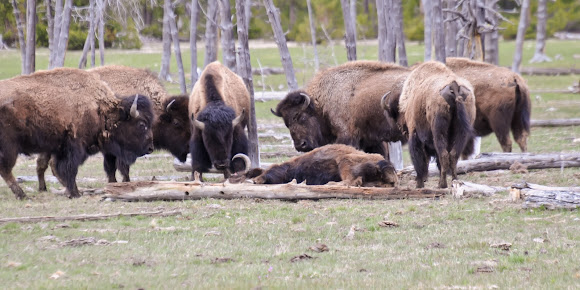 A large herd of bison were travelling across a meadow when one of its members was stricken with an unknown injury or illness and fell to the ground (not observed by me). When I came upon the scene, I observed younger members of the herd nudging the fallen animal in an apparent attempt to revive him. This went on for at least a couple of hours until the herd moved on and the stricken animal died. "Until recently, humans were thought to be the only species to experience complex emotions and have a sense of morality. But Prof Marc Bekoff, an ecologist at University of Colorado, Boulder, believes that morals are "hard-wired" into the brains of all mammals and provide the "social glue" that allow often aggressive and competitive animals to live together in groups." excerpted from: http://www.telegraph.co.uk/earth/wildlif... Yellowstone is the only place in the lower 48 states where a population of wild bison has persisted since prehistoric times, although fewer than 50 native bison remained here in 1902.