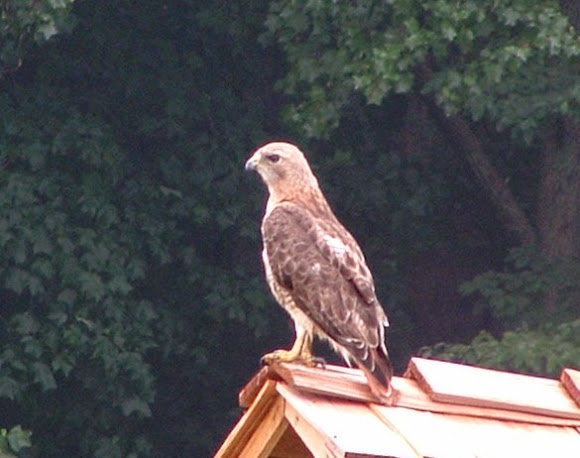 Red-tailed Hawk plumage can be variable, depending on the subspecies and the region. These color variations are morphs, and are not related to molting. The western North American population, is the most variable subspecies and has three color morphs: light, dark, and intermediate or rufus. hough the markings and hue vary, the basic appearance of the Red-tailed Hawk is consistent. The underbelly is lighter than the back and a dark brown band across the belly, formed by horizontal streaks in feather patterning, is present in most color variations. The red tail, which gives this species its name, is uniformly brick-red above and pink below. The bill is short and dark, in the hooked shape characteristic of raptors.They have short,broad tails and thick,chunky wings The legs and the feet are all yellow (wikipedia)

He was enjoying our new kiosk we just finished putting in. The third picture is blurry but you can see the red tail.

I love it! Beautiful!!