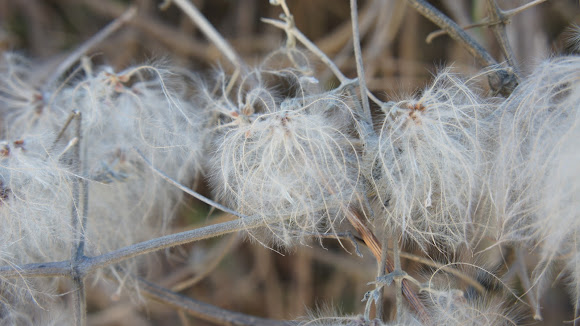 The pictures above are of fruit of Clematis vitalba.C. vitalba is a deciduous, woody climber that can live for 40 years (West, 1991) or more. Woody stems can grow to over 10 m in length and can reach 15-20 cm in diameter. New stems are deeply ridged, dark purple and green, with silky white hairs near the apex, and have been recorded to grow as much as 3 m per year (West, 1991). Stems grow erect between holds, rather than entwining a vertical stem. A shoot can support itself for some distance before twining 3-4 times around a new hold of approximately 1 cm in diameter (Kennedy, 1984; West, 1991). Vines can climb 25 m-tall forest trees, but have difficulty colonizing tall, emergent species with long distances between branches (Ogle et al., 2000). Mature stems have grey, stringy bark, with thickened nodes approximately 15 cm apart. Where stems grow along the ground, adventitious roots form at the nodes. Leaves are opposite, and almost all comprise five 3-10 cm leaflets with long petioles. Leaflets are variable in size and shape, ovate, acute to acuminate, rounded or sub-cordate at the base, and coarsely toothed or entire (Cronk and Fuller, 1995). Leaves have light- and shade-forms (Kennedy, 1984). The flowers are solitary, in terminal or axillary cymes. Flowers are small (c. 2 cm), white to greenish-white, usually hermaphrodite, and without petals (Clapham et al., 1987). The achenes are compressed, 2.0-2.5 mm long. Each retains a feathery style that is 2-3 cm long. Achenes are produced in large heads.

Occurs in: agricultural areas, coastland, natural forests, planted forests, range/grasslands, riparian zones, ruderal/disturbed, scrub/shrublands, urban areas C. vitalba is a versatile plant capable of growing in a variety of habitats, on a variety of substrates from trees and shrubs in forest margins to hedgerows, fencelines, dunes, riverbanks, and grassland. It is commonly associated with degraded and disturbed areas (Beekman, 1980), and so can be invasive within its native range. In both its native and exotic range, C. vitalba typically occupies forest margins and gaps and can invade open spaces. The distribution of C. vitalba in England is mainly on chalk and limestone, but elsewhere in Europe it occurs on a wide range of moderately fertile, well-drained soils. In New Zealand it is often associated with riverbeds, and fertile alluvial soils (Atkinson, 1984; West, 1991). It does not appear to be unusually sensitive to soil acidity or nutrient deficiency although heavy soils may restrict growth and spread (Atkinson, 1984). Its native range is in the latitudinal range 36-52°N, and it does not thrive north of 36°S. It is a lowland species in New Zealand, suggesting that it is limited by cooler temperatures at high elevation (Atkinson, 1984). In North America it occurs near the coast or on the Great Lakes at latitudes similar to those in Europe (Anon., 2003). These distributions suggest that C. vitalba is a warm temperate species although infestations can occur in microhabitats within regions that otherwise appear inhospitable (Atkinson, 1984). C. vitalba also invades riparian vegetation, waste land, long grass, and even urban areas (Atkinson, 1984; Buxton, 1985; West, 1991). C. vitalba seedlings are readily grazed, and as such C. vitalba is often confined to ungrazed areas (West, 1992). http://www.cabi.org/isc/?compid=5&ds...

Clematis vitalba is grown as an ornamental species in Europe, and its English common names are old man's beard or traveller's joy (Hill et al. 2001). The Plants For A Future Database (2003) reports that, "Young shoots can be cooked and used like hop shoots (Humulus lupulus), but that caution is advised due to reports of toxicity." The authors also state that, "The leaves are analgesic, diuretic and rubefacient. The boiled roots and stems are used as a cure for the itch. When applied in the nostrils, the plant juice has been used to relieve migraine attacks, but it can also destroy the mucous membranes. The plant should not be taken internally because it is poisonous." The authors report that, "The stems can be used in basketry."