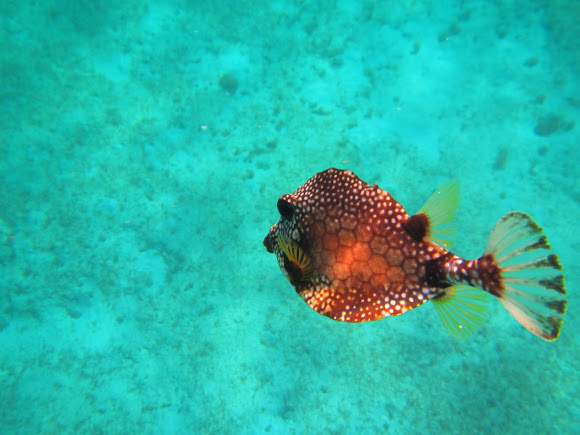 Rhinesomus triqueter, the smooth trunkfish, is a species of boxfish. It is the only known member of its genus. The smooth trunkfish has an angular body sheathed in plate-like scales, growing to a maximum length of 47 centimetres (19 in), though 20 centimetres (7.9 in) is a more normal size. The body is enclosed in a bony carapace and, when viewed from the front, is triangular in shape with a narrow top and wide base. The fish has a pointed snout with protuberant lips encircling a small mouth. The tail is shaped like a brush. The general background colour is dark with a pattern of small white spots, often in hexagonal groups giving a honeycomb-like appearance in the middle area of the body. The tip of the snout and the area round the pectoral fins are dark with few spots and the eyes are black. The fins are usually yellowish with a dark base and tips. They have only soft rays with no spines. The juveniles have dark coloured bodies covered in large yellow spots. As they get older, they develop a pale area where the honeycomb markings will later appear.

Found on and near reefs in the Caribbean Sea, Gulf of Mexico and subtropical parts of the western Atlantic Ocean.