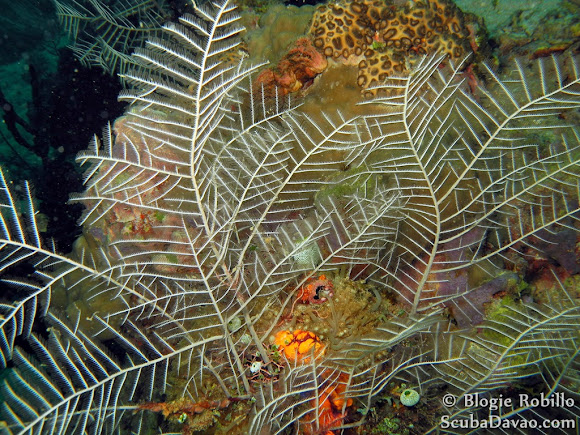 Also known as Fire Hydroid, Stinging Hydroid, Stinging Bush Hydroid, Philippine Hydroid, White Stinging Sea Fern, Feather Hydroid, and Christmas Tree Hydroid. They feed on plankton, and grow to a length of aboutt 45cm. Hydroids look like tiny ferns or feathers, many are smaller than 5cm although some can grow to 50cm. Stinging hydroid polyps are very small and are carried on the stem and side branches of feather/fern-like colonies. The different species are classified according to the specific layout of the polyps on the colony's branches, as well as the arrangement of the branches themselves. This species can inflict painful stings.

Found in clumps on coral and rocky reefs in areas of current and in surge zones, at depths of 1 to 25m. Circumtropical distribution. They compete for space with sponges on bare patches of dead coral and rocks.

This is a type of hydroid, I believe. I was stung by it, that's why I took photos of it! FYI: hydroids are not plants -- they belong to the Animal Kingdom.

Got stung by this one, last January, and now I've finally got it identified! :D