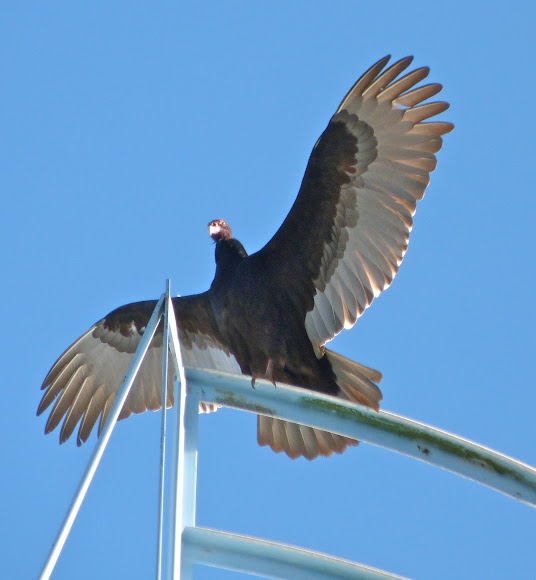 The Turkey Vulture is a bird found throughout most of the Americas. It is also known in some North American regions as the Turkey Buzzard . One of three species in the genus Cathartes, in the family Cathartidae, the Turkey Vulture is the most widespread of the New World vultures, ranging from southern Canada to the southernmost tip of South America. The Turkey Vulture is a scavenger and feeds almost exclusively on carrion. It finds its food using its keen eyes and super-sense of smell, flying low enough to detect the gasses produced by the beginnings of the process of decay in dead animals. In flight, it uses thermals to move through the air, flapping its wings infrequently. It roosts in large community groups. Lacking a syrinx—the vocal organ of birds—its only vocalizations are grunts or low hisses. It nests in caves, hollow trees, or thickets. Each year it generally raises two chicks, which it feeds by regurgitation. It has very few natural predators. In the United States of America, the vulture receives legal protection under the Migratory Bird Treaty Act of 1918.

We spotted three vultures sunning themselves on the top of an industrial building. Two took off before we could get out cameras out, but the third "posed" for us for about 10 minutes giving us the opportunity to really appreciate it's immense wingspan.

Hmm i know the feeling all too well. Guess patience pays off though and a bit of luck!

Yes Alice, I was extremely lucky! I wish more of the local birdlife was as cooperative as usually everything disappears the moment I grab my camera!

Great set of photos. Lucky to get him in such a majestic pose!

Exactly what I thought when I saw him Sachin! :)

Of course! Silly me. It's cold there at the moment. Hard to remember when we are sweltering. Our birds are doing similar to cool down!

Thanks Argybee!
I've seen them sunning themselves a few times - but they usually take off before I can get the shot! Luckily his guy was a real poser! :)

Olllld.. turrrrrkey buzzarrrrrrd.....
I love the way he's showing of his wings.
Do they do that often or is it just a hot day?
Excellent set of pics KarenL. Thanks.

Thank you Mary! Yes beautiful in the air - on the ground not so much! :)

Wonderful captures, and great information. I love watching them as they seem to float overhead in the air currents.

stunning pictures of a stunning bird.!!