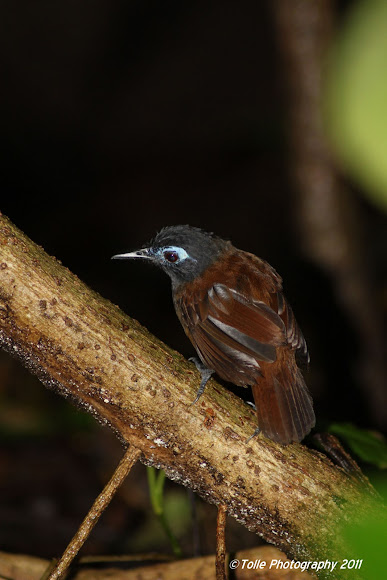 The Chestnut-backed Antbird is heavy-bodied and short-tailed, typically 14 centimetres (5.5 in) long, and weighing 28 grams (0.99 oz). Both sexes have a pale blue bare patch of skin around each eye. The adult male has a blackish head, neck and breast, and the rest of the upperparts, wings and tail are chestnut. The flanks and the lower belly are a somewhat darker brown. The female has a brownish-black head and neck, but this does not extend to the breast. Her underparts are a darker chestnut in the nominate subspecies of the Caribbean lowlands from Nicaragua to Panama, but more rufous in M. e. occidentalis of the Pacific lowlands in Costa Rica and Panama. M. e. niglarus from eastern Panama and far north-western Colombia (northern Chocó Department) is similar. Young birds are duller and slatier than the adults.

It is found in humid forests in Central and South America (Chocó-Magdalena), ranging from eastern Nicaragua to western Ecuador. It mainly occurs in lowlands up to an altitude of 900 metres (3,000 ft) m, but locally it occurs higher. This is a common bird in the understory thickets of wet forest, especially at edges, along streams and in old treefall clearings, and in adjacent tall second growth.