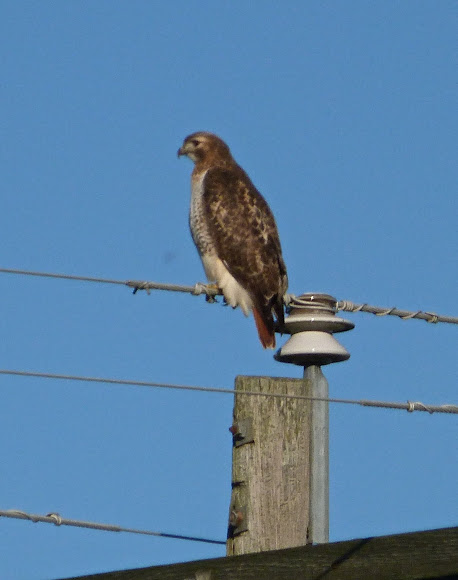 A male Red-Tailed Hawk may weigh from 1.5 to 3 lb and measure 18 to 22 in, while a female can weigh between 2 and 4.4 lb and measure 19 to 26 in long; wingspan is about 45 to 52 in. As is the case with many raptors the Red-tailed Hawk displays sexual dimorphism in size, as females are up to 25% larger than males. Though the markings and hue vary, the basic appearance of the Red-tailed Hawk is consistent. The underbelly is lighter than the back and a dark brown band across the belly, formed by horizontal streaks in feather patterning, is present in most color variations. The red tail, which gives this species its name, is uniformly brick-red above and pink below. The bill is short and dark, in the hooked shape characteristic of raptors.They have short,broad tails and thick,chunky wings. The cere, the legs, and the feet of the Red-tailed Hawk are all yellow. Immature birds can be readily identified at close range by their yellowish irises. As the bird attains full maturity over the course of 3–4 years, the iris slowly darkens into a reddish-brown hue. In both the light and dark morphs, the tail of the immature Red-tailed Hawk are patterned with numerous darker bars.

We stopped to photograph the hawk in the first 2 photos. A few hundred yards along the same road we spotted a another hawk in a tree & while we were photographing it, a third rose from the field below with a rabbit in it's talons. Unfortunately it dropped it's prey, & didn't return to it while we were there though I'm sure it did as soon as we had driven on!

I never followed up on the dog Emma, but I'm thinking he has a new home with someone that wouldn't let him roam on the interstate!
Thanks Edward!

You seem to have adventures on the road ,don't you? What happened to the dog that you found? the one who was going in circles for three days? The Last i heard from you is that a lady took him in. l