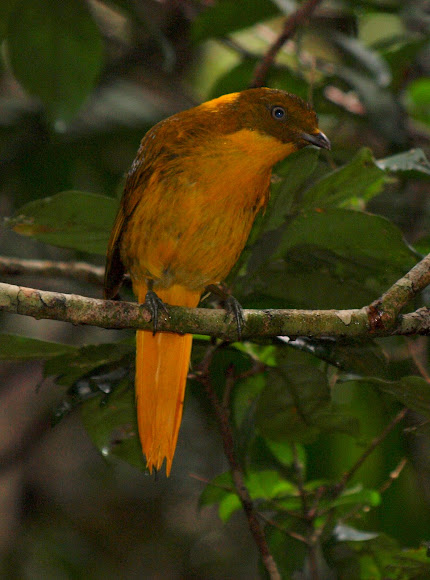 The mature male is a golden-olive brown colour, with golden yellow underparts, crown and nape. He has an unusual feather structure that refracts light to produce pure white highlights on the plumage. When younger, the male looks the same as the female. Both have a golden iris. · The female, less conspicuous than the male, is olive-brown with ash-grey below. She raises the one or two young in a small cup nest in a tree crevice.

It is restricted to upland rainforests, where it is numerous above 900 metres altitude.

The bower is very important to the bird, and rival males may steal higher valued decorations from each others’ bowers. This is because the females are discriminative – they will only select the male who uses ornaments that are the rarest or hardest to obtain. · The average life of a bower structure is 9 ½ years, and the same sites are often used from generation to generation, perhaps for 60 years. · The male tries to fertilise as many females as possible during each breeding season. The females assess the males’ vocals, plumage, displays and bower structure before selecting and mating.

Wiki - "A common species in its habitat, the Golden Bowerbird is evaluated as Least Concern on the IUCN Red List of Threatened Species."