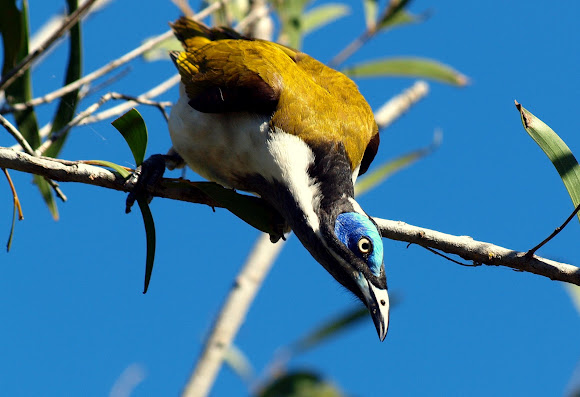 The Blue-faced Honeyeater is a large black, white and golden olive-green honeyeater with striking blue skin around the yellow to white eye. The crown, face and neck are black, with a narrow white band across the back of the neck. The upperparts and wings are a golden olive green, and the underparts are white, with a grey-black throat and upper breast. The blue facial skin is two-toned, with the lower half a brilliant cobalt blue. Juvenile birds are similar to the adults but the facial skin is yellow-green and the bib is a lighter grey. This honeyeater is noisy and gregarious, and is usually seen in pairs or small flocks. It is known as the Banana-bird in tropical areas, for its habit of feeding on banana fruit and flowers.

The Blue-faced Honeyeater is found in tropical, sub-tropical and wetter temperate or semi-arid zones. It is mostly found in open forests and woodlands close to water, as well as monsoon forests, mangroves and coastal heathlands. It is often seen in banana plantations, orchards, farm lands and in urban parks, gardens and golf courses

Feeding: The Blue-faced Honeyeater feeds mostly on insects and other invertebrates, but also eats nectar and fruit from native and exotic plants. It forages in pairs or noisy flocks of up to seven birds (occasionally many more) on the bark and limbs of trees, as well as on flowers and foliage. These flocks tend to exclude other birds from the feeding area, but they do feed in association with other species such as Yellow-throated Miners and Little Friarbirds. Breeding: The Blue-faced Honeyeater forms breeding pairs, and may sometimes be a cooperative breeder, where immature birds help the main breeding pair to feed nestlings. Most nests are made on the abandoned nests of Grey-crowned Babblers, Noisy, Silver-crowned and Little Friarbirds, Noisy Miner, Red Wattlebird, Australian Magpie, Magpie-Lark and, rarely, butcherbirds or the Chestnut-crowned Babbler. Sometimes the nests are not modified, but often they are added to and relined. If a new nest is built, it is a neat round cup of rough bark, linked with finer bark and grass. Both the male and female tend the young birds, sometimes with the assistance of helpers. The fledglings remain with the parents for some time after fledging.

GREAT SPOTTING...
Thanks for sharing on Project Noah...!!

I have added some information to this spotting