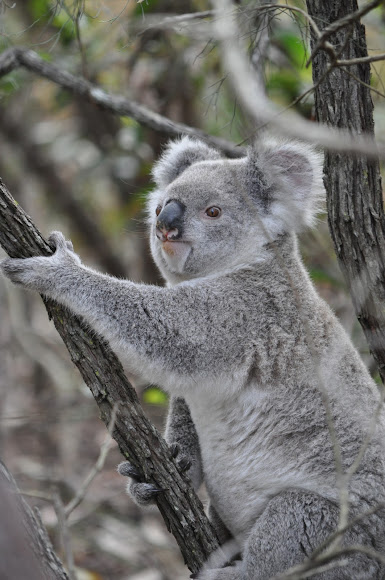 Unique to Australia the Koala is one of the best known marsupials - having a pouch for young. Grey, soft fur covers the body, with white/cream patches on rump, underbelly, ears and face varying in individuals. Eyes are positioned to the front of the large head, large furry ears and a black nose dominate the appearance. Size of Koalas varies depending on where in the country they are from - smaller in the north, larger and fluffier in the south. Height can reach 78cm or more, weight of adults ranges upwards from 5 kilograms. Large claws on hands and feet enable Koalas to climb to the highest tree tops in search of their specialised food - leaves from selected eucalypt trees. They have been known to eat a variety of other leaves from different species such as Pine but only as they continue the search for preferred food.

Koalas are found mostly along the eastern areas of Australia in several states, they were transported to places such as Kangaroo island off SA and have established colonies, in other regions they have declined in number due to disease, stress, predation by domestic and feral species, human disturbances, land clearing. They prefer areas with large trees, with good quality foliage of preferred species of which there are more than 25.