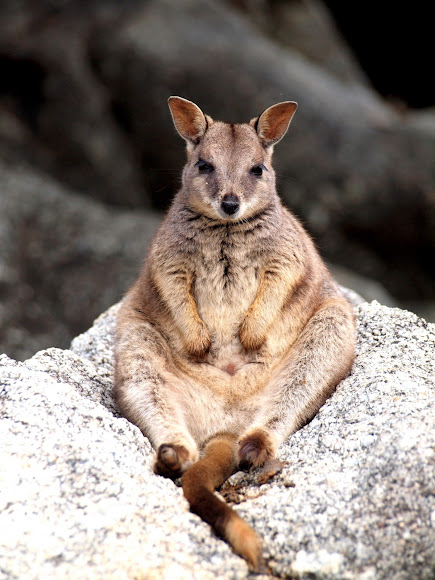 Males average 4.5 kg and females average 3.8 kg. The Mareeba Rock-wallaby is part of a complex of species that includes the Sharman's Rock-wallaby, the Unadorned Rock-wallaby and the Allied Rock-wallaby. These species are not easily distinguished except by the shape and number of chromosomes. The genera tourist does not have a cytologist's kit to make such distinctions and so locality is the best guide to determine which species you are seeing. Freshly moulted individuals are typically greyish on the back but as the year advances the colour changes to pale through to dark brown. Some individuals are almost black. The underside of the the body and limbs is lighter and typically a sandy brown. There is a pale cheek stripe, with indistinct and patchy markings behind the shoulders and a dark dorsal stripe along the crest of the head. The paws and feet are dark and the tail darkens towards the tip which has an indistinct dirty white brush.

The Mareeba Rock-wallaby seems to prefer more open habitat than some of the other Queensland rock-wallabies. It is most often found in rocky habitat embedded within open forest and grassy woodland and less often in the thicker vine forests.

The Mareeba Rock Wallaby was only really `discovered' in 1992 when it was recognized as a genetically distinct species, rather than a subspecies or race of the "Unadorned Rock Wallaby" Petrogale inornata (Strahan 1985). They are quite restricted in distribution, being found only in the Mareeba area, just west of Cairns, north to Mt.Carbine and south to Mt. Garnet. Within this area, they are found in rocky habitats, which tend to be granite boulders found in tropical open woodland. Reproductive behaviour: The reproductive behaviour of this species has not been described but they are likely polygamous since they live in large colonies. They are also likely to breed throughout the year with a possible concentration of large pouch young and young-at-foot in months that typically receive the highest rain. Social organisation: Rock-wallabies are typically social and live in colonies varying from a few individuals to over 100. The Mareeba Rock-wallaby appears to be at the latter end of the scale with colonies of up to fifty making it amongst the most social of the macropods.

Just kicking back and relaxing .... maaate!

very cute ! - Looks like he has a custom-made comfortable seat ..

Have added some information on this spotting