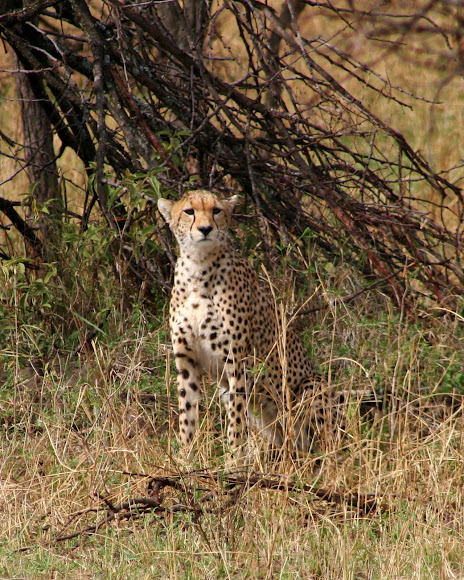 The cheetah (Acinonyx jubatus) is a large-sized feline (family Felidae) inhabiting most of Africa and parts of the Middle East. The cheetah is the only extant member of the genus Acinonyx, most notable for modifications in the species' paws. As such, it is the only felid with non-retractable claws and pads that, by their scope, disallow gripping (therefore cheetahs cannot climb vertical trees, although they are generally capable of reaching easily accessible branches). The cheetah, however, achieves by far the fastest land speed of any living animal—between 112 and 120 km/h (70 and 75 mph)[3][4] in short bursts covering distances up to 500 m (1,600 ft), and has the ability to accelerate from 0 to over 100 km/h (62 mph) in three seconds.[5] The cheetah's chest is deep and its waist is narrow. The coarse, short fur of the cheetah is tan with round black spots measuring from 2 to 3 cm (0.79 to 1.2 in) across, affording it some camouflage while hunting. There are no spots on its white underside, but the tail has spots, which merge to form four to six dark rings at the end. The tail usually ends in a bushy white tuft. The cheetah has a small head with high-set eyes. Black "tear marks" running from the corner of its eyes down the sides of the nose to its mouth keep sunlight out of its eyes and aid in hunting and seeing long distances. Although it can reach high speeds, its body cannot stand long distance running, because it is more suited to short bursts of speed. The adult cheetah weighs from 35 to 72 kg (77 to 160 lb). Its total head-and-body length is from 110 to 150 cm (43 to 59 in), while the tail can measure 60 to 84 cm (24 to 33 in) in length.[12][13][14] Cheetahs are 66 to 94 cm (26 to 37 in) tall at the shoulder. Males tend to be slightly larger than females and have slightly bigger heads, but there is not a great variation in cheetah sizes and it is difficult to tell males and females apart by appearance alone. Compared to a similarly sized leopard, the cheetah is generally shorter-bodied, but is longer tailed and taller (it averages about 90 cm (35 in) tall) and so it appears more streamlined.

The cheetah thrives in areas with vast expanses of land where prey is abundant. The cheetah likes to live in an open biotope, such as semidesert, prairie, and thick brush, though it can be found in a variety of habitats. In Namibia, for example, it lives in grasslands, savannahs, areas of dense vegetation, and mountainous terrain. In much of its former range, the cheetah was tamed by aristocrats and used to hunt antelopes in much the same way as is still done with members of the greyhound group of dogs.

Another great spot July! I love the second photo especially!
There is a Cheetah mission you might like to add this to - http://www.projectnoah.org/missions/8224...