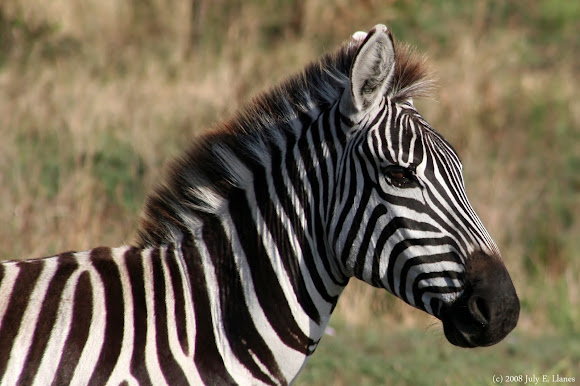 The plains zebra is mid-sized, smaller on average than the other two zebra species, and thick bodied with relatively short legs. There is some variation in size, based on the animals' condition and subspecies. Adults of both sexes can stand from 1.1 to 1.47 m (3.6 to 4.8 ft) high at the shoulder, are 2 to 2.5 m (6.6 to 8.2 ft) long, not counting a 50 cm (20 in) tail, and weigh 175 to 387 kg (390 to 850 lb). Males may weigh 10% more than females.[6][7] Like all zebras, they are boldly striped in black and white, and no two individuals look exactly alike. They also have black or dark muzzles. The natal coat of a foal is brown and white. All have vertical stripes on the forepart of the body, which tend towards the horizontal on the hindquarters. The northern populations have narrower and more defined striping;[8][9] southern populations have varied but lesser amounts of striping on the underparts, the legs and the hindquarters.[8] Southern populations also have brown "shadow" stripes between the black and white coloring.[8][9] These are absent or poorly expressed in northern zebras.[8][9] Embroyoloical evidence has shown that the zebra's background color is dark and the white is an addition.[10] The first subspecies to be described, the now-extinct quagga, had plain brown hindquarters. (Technically, because the quagga was described first as E. quagga, the proper zoological name for the most common form of the plains zebra is E. quagga burchelli.) There have been various mutations of the zebra's pelage from mostly white to mostly black.[11] Rare albino zebras have been recorded in the forests of Mount Kenya.[12]

Tracking the great migration...finally met up with the most beautiful gathering of zebras, wildebeest and other animals in the North part of the Serengeti National Park, we were very close to the border with Kenya.