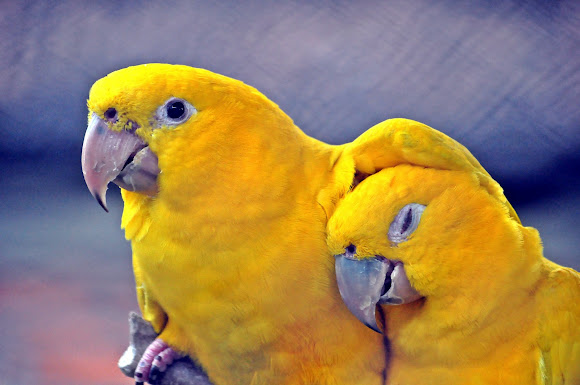 The Ararajuba is a family Psittacidae Psittaciformes. Also known as Guaruba, Guarajuba and Tanajuba. Guaruba derived from the Tupi: maned = bird, Yuba = yellow. At the end of the sixteenth century was mentioned by Ferdinand Cardin, Bahia, as a commercially valuable bird, equivalent to the price of two slaves.

Found exclusively in Brazil, east of Maranhão southeast of Amazonas, and especially in Pará, where the Amazon River to the south and east of the Rio Madeira. There are occasional records in the 1990s in northeastern Rondônia and extreme northern Mato Grosso (no more recent records). Occurs at the interface of the trough lowlands of the Amazon River and the edge of the Central Highlands (Brazilian Shield).

Wow beautiful parrots! I've added two reference links to your spotting (EOL and Wikipedia) so if someone want to get more information about them they can check it!
I recommend you to add in the Notes field you saw them in the zoo, that way people won't get confused about their real range.

There is also this mission you can add your spotting to:
http://www.projectnoah.org/missions/7973...

And bem-vindo à Project Noah, we look forward to see more of your spottings!

Thank you. These birds are not native to the region where I live. These photos were taken during a visit to the local zoo.

Neat looking! Amazing color on them!

On a side note, was this shot at a zoo/aviary?