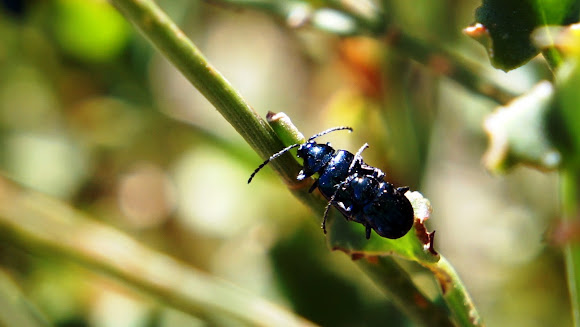 C. cobaltinus appears to have an iridescent cobalt exoskeleton. Both sexes range from 6–9 millimetres (0.24–0.35 in) in length, with clubbed antenna. The elytra are usually with more or less evident epipleura, changing within the varying species within the Chrysomelidae. It rarely has an exposing pygidium. The body is oval, although the ventral is not prominently convex. Characterization is difficult, family members are diverse in form and have no distinctive characters in common. Some subfamilies (Eumolpinae) are distinctive in appearance or characters. Many species within this family are similar to the long-horned beetle, but each antenna is nearly always half the body length. Eyes are not notched. Tarsi 5-5-5, 4th segment is small. They can range in size from 1–16 millimetres (0.04–0.63 in), but rarely over 12 mm (0.5 in).

C. cobaltinus is similar to click beetles whereas they can launch themselves a couple times the length of their body. Both adults and larvae feed on milkweed plants. Adults typically feed on the foliage and flowers of the newly developed milkweed plant. When a large community appears, they consume a large portion of the leaf tissue from the plant, which causes significant damage to the plant. The adults eat holes in the leaves of milkweed, appearing in spring as the days become warmer and the milkweed leafs begin to develop. During the spring they disperse in large numbers on various plants within the same area of distribution.