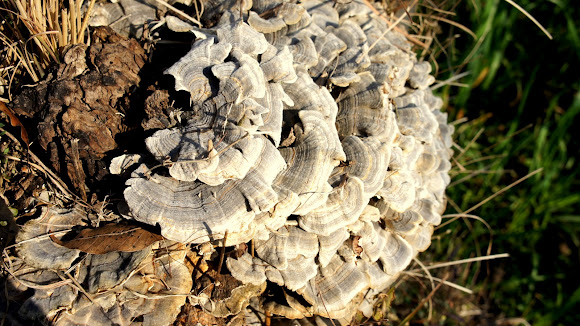 Cap: Up to 10 cm across; only a few mm thick; flexible when fresh; circular, semicircular, bracket-shaped, or kidney-shaped; often fused with other caps; densely hairy or velvety, often with alternating zones of texture; with concentric zones of white, brown, cinnamon, and reddish brown (but highly variable in color and sometimes with other shades, including blue, green, and orange). Pore Surface: Whitish to pale grayish; not bruising; with 4 or more tiny pores per mm; tubes up to 3 mm deep. Flesh: Insubstantial; whitish; tough and leathery. Odor and Taste: Not distinctive. Spore Print: Whitish.

Ecology: Saprobic on the deadwood of hardwoods, or rarely on the wood of conifers; annual; causing a white rot of the sapwood; growing in dense, overlapping clusters or rosettes on logs and stumps; year-round; very widely distributed and common in Shivalik regions of Himalaya .

Trametes versicolor, often called the "turkey tail," has the dubious distinction of being the only member of the forest fungal fowl community not named for the full bird, but a feathery fraction. However, the chicken of the woods and the hen of the woods look nothing at all like chickens or hens, while the turkey tail does look (vaguely) like a turkey's tail. Who started this clucking menagerie of mushroom monikers, anyway? Was Old MacDonald a mycologist?