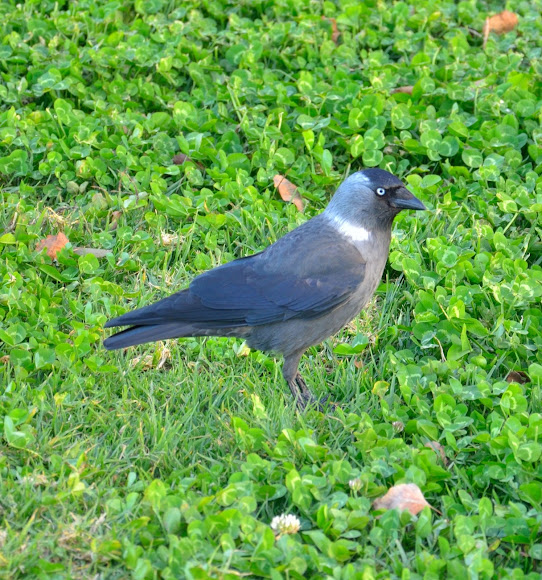 Measuring 34–39 centimetres (13–15 in), the Jackdaw is the second smallest species in the genus Corvus. Most of the plumage is a shiny black, with a purple or blue sheen on the crown, forehead and secondaries, and a green-blue sheen on the throat, primaries, and tail. The cheeks, nape and neck are light grey to greyish-silver, and the underparts a slate-grey. The bill and legs are black.[16] The iris of adults is greyish or silvery white. The iris of juvenile Jackdaws is light blue, then brownish, before whitening around a year of age. In flight, Jackdaws are separable from other corvids by their smaller size, faster and deeper wingbeats and proportionately narrower and less fingered wings. They also have a shorter, thicker neck, a much shorter bill and frequently fly in tighter flocks. The underwing is uniformly grey, unlike choughs. On the ground, Jackdaws have an upright posture and strut about briskly, their short legs making their gait rapid. They feed with their heads down to horizontal. Sexes and ages are alike.Jackdaws undergo a complete moult from June to September in the western parts of their range, and a month later in the east.[14] Immature birds are duller in plumage. It is very similar in structure, behaviour and calls to the Daurian Jackdaw, with which its range overlaps in eastern Asia. Adults are readily distinguished, since the Daurian has a pied plumage, but immature birds are much more similar, both species having dark plumage and dark eyes. The Daurian tends to be darker, with a less contrasting nape, than its relative. Within its range, the Jackdaw is unmistakable, its short bill and grey nape are distinguishing features. From a distance, it might be confused with a Rook, or its silhouette in flight a pigeon or chough.