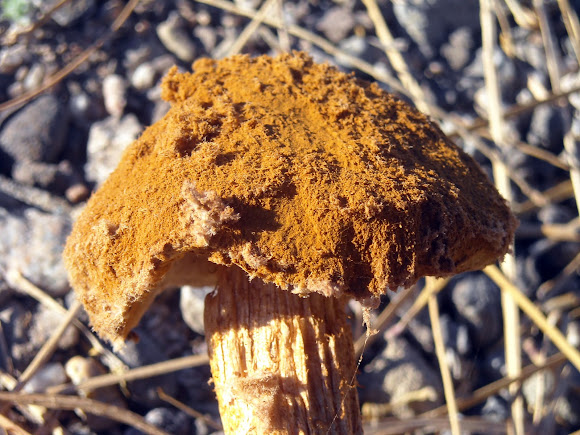 This mushroom is said to be common in the urban desert, yet I have only seen it in this one instance. At a commanding height, this stalked puffball sure is a sight to see (jaw dropping has been proven -- I'm living proof -- to occur), as some can grow to be two feet high! These were in a group of around 4-5 near a home, and due to the typical behaviour of desert-type mushrooms, I'd say it could easily be 3 months or older. Since water from rains is scarce, the monsoon season triggers the rapid production of these guys, and as the days get drier they are well-suited to survive (the base of the stem is surprisingly moist, much like a damp cotton ball).

Growing in a small group in the urban desert. These were spotted in the lawn of a Tucsonan's house, and after politely asking to snap some shots of them, I also noticed that they were in a shaded area for most of the day. The soil was rich with fallen leaves of a nearby bush. Additionally, it has not rained substantially in a month or so. These are typically found in sandy regions of deserts.

As mentioned, the base was extremely damp, while the rest of the specimen was dry as a twig. The rusty-brown spores on the cap completely coat anything they come in contact with, easily providing a spore print after rubbing a nearby object (nature's "magic marker?"). Something that also should be observed is how this puffball resembles the cap of a gilled mushroom, yet there is nothing underneath the cap that produces spores (they are released on top). The reason for this is because the early life of this mushroom begins in a universal veil, a sort of egg that ruptures as the fungi grows, leaving a cup-like volva at the base and explaining the odd underside of cap. However these specimens have long lost their volvas most likely due to the elements and old age. Keep in mind also that the width of the stem varies, along with the scaly-ness (could be bare or rugged).

Oh, you're telling me! After hopelessly searching the parks here in town for any fungal activity, I was very taken aback to see such a grand fungi near some shade. And the surprising thing is that the base is extremely moist, even though I found it on a hot scorching day!