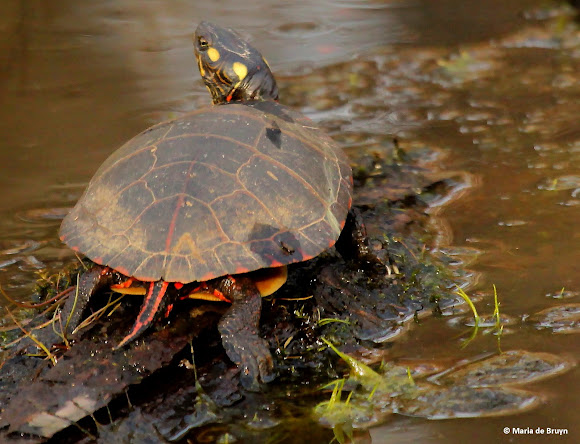 The painted turtle (C. picta) is the only species in the genus Chrysemys. They are the most common turtle in North America. Fossils show that the painted turtle existed 15 million years ago, but four subspecies (the eastern, midland, southern, and western) evolved during the last ice age. The painted turtle has a long, oval smooth shell, with large scutes in straight rows across its back. The shell varies in color from olive to black. They also have yellow and red stripes on their necks, legs, and tails. The face has only yellow stripes, with a large yellow spot and streak behind each eye .Males can be differentiated from females by their longer foreclaws, longer tails, and more depressed shells; males are also usually smaller than females. Adults range from 4.5 to 8 inches (10-18 cm) in carapace length. Hatched turtles grow until sexual maturity: 2–9 years for males, 6–16 for females. Adults in the wild can live for more than 55 years. They are only active in daytime, basking on logs or rocks for warmth. Eastern Painted Turtles eat many plants, including duckweed, algae, and water lilies. They also eat earthworms, insects, leeches, snails, crayfish, tadpoles, frogs, fish, and carrion. Animals that prey on Eastern Painted Turtles and their eggs include: chipmunks, squirrels, herons, raccoons, skunks, groundhogs, larger turtles, crows, large fish, snakes, crows, hawks, bullfrogs, and foxes. Sometimes painted turtles bask with other turtles, such as the larger Red-eared Slider. If any of the turtles sense danger, they will all quickly dive into the water. They defend themselves by kicking, scratching, biting, or urinating.

The Eastern Painted Turtle ranges from southeastern Canada to Georgia with a western boundary at approximately the Appalachians. They prefer ponds, lakes, marshes, and other bodies of still to sluggish water. They also prefer soft bottoms and abundant aquatic vegetation

Also used as a source: http://www.fcps.edu/islandcreekes/ecolog...

I love this spotting Maria! Great series of photographs, and the details in the description and notes are a great contribution to Noah!

Thank you, Annimel. I was lucky to spot them yesterday around dusk. They usually slide off into the water as soon as they spot a person (and several did that).