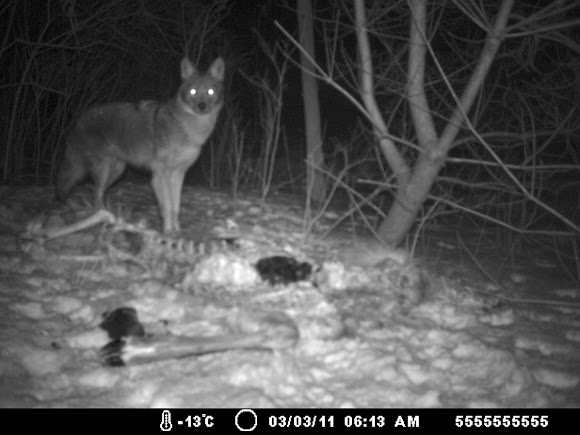 Coyotes sightings caught on night vision motion censored prey cam ! These photo where captured on a cold night in march 2011 after hearing the coyotes from my house I set out to go to find them , I arrived on site sometime in the late night, I waited until the coyotes left so I could set up my camera equipment. It was a little scary knowing that I was standing right in the middle of a pack of what I thought was the new hybrid mix of coyote/wolf from east /west mix, I was un shire at that time, and because they are new, I knew vary little about their habits, I didn't even know if they would try to attack me but I was not to concerned about that! I would fight if I had to lol:) so I set up and moved back and watched from a distance, I noticed that one dog at a time would enter the feeding site to eat and the rest hung around in the back ground , likely on guard duty, these coyotes are vary well organized, I estimate about 7 in this pack! I there bigger and smarter then I'm used to seeing around here. So It all turned out well, I retrieved the photos and returned home with the photos I set out after!

It does look stockier than a coyote but smaller than a wolf. Are coyotes in that part of Canada larger than those in the middle USA? Nice series.

Have you seen the "nature of things" special on the coywolf? It's pretty interesting!!

I really am not to shire if these dogs are coyote cross wolves, some of the locals had told me they were, were working on the true identification now,
as far as I know the camera dates are correct, it was cold out there!
I would leave the camera running on site taking photos on a motion censer, and I would come back the next day or so to replace the chip. thanks Argybee for the comment:)

Great story. I never knew coyotes and wolves could mix.
Great job getting these pics together too. Don't know if your times and temps on the shots are right - if so they speak of incredible patience by you and them.