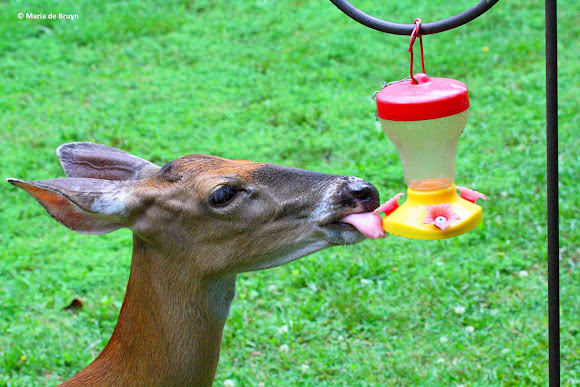 The white-tailed deer's coat is a reddish-brown in the spring and summer and turns to a grey-brown throughout the fall and winter. The deer can be recognized by the characteristic white underside to its tail, which it shows as a signal of alarm by raising the tail during escape. Deer have dichromatic (two-color) vision; humans have trichromatic vision. So what deer do not see are the oranges and reds that stand out so well to people. Males re-grow their antlers every year. Antlers begin to grow in late spring, covered with a highly vascularized tissue known as velvet. The velvet comes off for winter. About 1 in 10,000 females also have antlers, although this is usually associated with hermaphroditism. Length and branching of antlers is determined by nutrition, age, and genetics. Whitetail deer eat large varieties of food, commonly eating legumes and foraging on other plants, including shoots, leaves, cacti, and grasses. They also eat acorns and fruit. Their special stomach allows them to eat some things that humans cannot, such as mushrooms and Red Sumac that are poisonous to humans. Their diet varies by season according to availability of food sources. The Whitetail stomach hosts a complex set of bacteria that change as the deer's diet changes through the seasons. If the bacteria necessary for digestion of a particular food (e.g., hay) are absent it will not be digested. White-tailed deer communicate in many different ways using sounds, scent, body language, and marking. All white-tailed deer are capable of producing audible noises, unique to each animal. Fawns release a high-pitched squeal, known as a bleat, to call out to their mothers. A doe makes maternal grunts when searching for her bedded fawns. Grunting produces a low, guttural sound that will attract the attention of any other deer in the area. Both does and bucks snort, a sound that often signals danger; they also stomp to warn of danger. There are several natural predators of white-tailed deer, including wolves, cougars, American alligators, bobcats, lynxes, bears, wolverines and coyotes.

It is a medium-sized deer native to the United States (all but five of the states), Canada, Mexico, Central America, and South America as far south as Peru. It has also been introduced to New Zealand and some countries in Europe, such as Finland, Czech Republic, and Serbia. In the Americas, it is the most widely distributed wild ungulate. White-tailed deer are generalists and can adapt to a wide variety of habitats.

I have been following this deer and her family for five years now; they visit my yard several times daily, sometimes to eat and sometimes to rest. They defend their territory against other deer families; I have seen the does rearing up to fight. She and her family do not eat the plants I want to keep because I use an effective repellant. She did surprise me by showing a taste for hummingbird nectar though! In her third year, she was attacked by a coyote and had a very deep, large wound in her back; I thought she might die but she obviously recovered. Her first daughter died, her second is still living. In 2011 she had twin males but one has disappeared so I presume he died. Only the first photo is from 2010; the others are from 2011 and 2012.

Thank you, Heather. I am fascinated by the fauna kingdom and have become a real PNoah fan since I am seeing so much wildlife (and plants) that I probably will never see in person. But I hope to see much more "face-to-face" in the future.

This is a very cute series. I'm impressed by a lot of your spottings Nopayahnah. You have quite the eye!

Thanks Nopayahnah! We are really lucky but it's a lot of work! We get to see a lot but usually too far from the house for the perfect shot! The foxes are the exception, they are reasonable relaxed in our presence unless we approach them directly.
When we moved here 2 years ago it was mostly pasture & we have been doing lots of planting to turn it into wildlife habitat - everything is still tiny in comparison to the space but we are already seeing so much more! I can't wait to see what 2012 brings!

How wonderful to have so much land. My yard is fairly small but I still see deer, foxes, coyotes, raccoons, opossums, squirrels (of course), chipmunks and birds, so I feel fortunate. Hope you get really good animal and bird sightings, Karen!

The deer do visit the salt licks & i've seen a few birds use it too. We have over 8 acres & i planted almost 100 trees & lots of shrubs last year - unfortunately way too much to spray will repellant! We are about to build some large earth ponds for the wildlife so hopefully we will get to see more of the deer this year!

I had out salt blocks and the deer licked them frequently. The house finches also used the blocks a lot (taught me something new about the finches). There is a very good product on the market to keep them off your plants and I have an effective home-made concoction as well.

Amazing that she survived her encounter with a coyote!

Very sweet! Our deer ignore the special deer blocks we buy for them in favor of our newly planted trees & shrubs, but the wild turkeys, crows, & thrashers eat the deer blocks, the foxes eat the bird seed, & the raccoon eats anything he can gets his paws on!