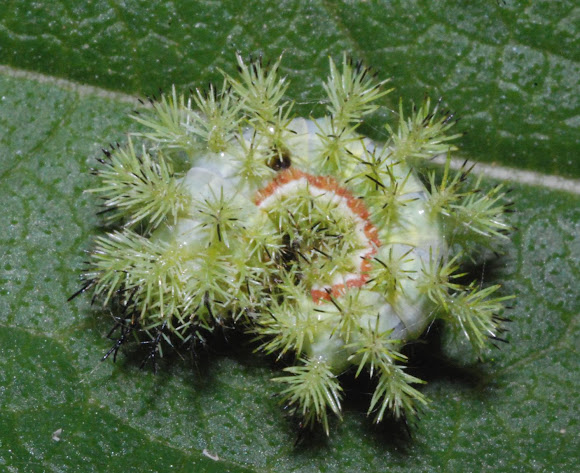 ADULTS: White filled, black and blue eyespots are hindwing are distinctive. Overall color varies from reddish to yellowish. Males are yellower, females redder. CATERPILLARS: Caterpillars gregarious in early instars, starting out orange then maturing to pale blue-green with clusters of spines and a red line along each side with white underneath.

It ranges from the southeast corner of Manitoba and in the southern extremes of Ontario, Quebec, and New Brunswick in Canada, and in the US it is found from Montana, North Dakota, South Dakota, Nebraska, Colorado, New Mexico, Texas, Utah, east of those states and down to the southern end of Florida.

Its list of host plants numbers well over one dozen species.

Hey, that's pretty cool. Thanks for using this in your blog, Nuwan. :-)

Congrats Aaron, your spotting is featured in the Project Noah blog http://blog.projectnoah.org/post/5644164...

I shook a tree by accident and a about 10 of these rained on me. It burns, a lot. Lol

In the first photo it almost looks like a plant!

Awesome! I can't wait to find one of these guys!