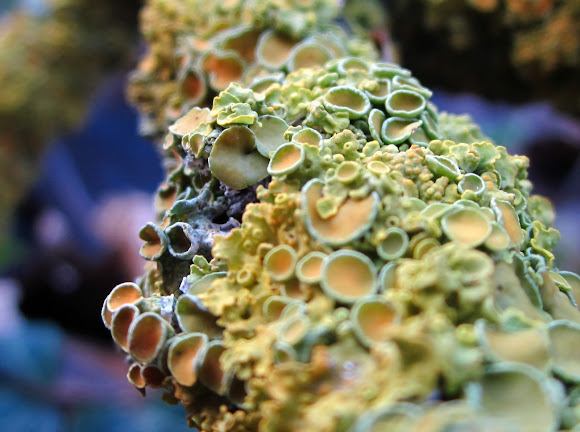 Xanthoria parietina, the lichen of gold ---Xanthoria parietina is a lichen that under conditions of strong sunshine and low humidity has a nice golden color, as if formed by bits of gold leaf glued together as more or less rounded rosette of no more than 10 cms. in diameter. Belongs to the family of the Parmeliaceae. -----Usually grows on the bark of trees in nutrient-rich alkaline pH, but his versatility allows him to live on superificies as diverse as limestone, roofing, asparagus and, most amazing, animal bones clean of flesh after putrefaction, by hunger for minerals ( http://mundani-garden.blogspot.com/2011/... )

Hardwood forests in low-elevation broad valleys; scattered on Populus and other hardwoods in riparian areas in agricultural and populated areas. It is often associated with high level of nitrogen and favored by eutrophication and can be often found near farmland and around livestock. X. parietina is a widespread lichen, and has been reported from Australia, Africa, Asia, North America and throughout much of Europe. In eastern North America and Europe, it is found more frequently near coastal locations. The increases in NO3 deposition as a result of industrial and agricultural developments in southern Ontario, Canada in the 20th century are thought to be responsible for the reappearance of this species in the local lichen flora

Description: The vegetative body of the lichen, the thallus, is foliose, and typically less than 8 centimetres (3.1 in) wide. The lobes of the thallus are 1–4 mm in diameter, and flattened down. The upper surface is some shade of yellow, orange, or greenish yellow, while the lower surface is white, with a cortex, and with sparse pale rhizines or hapters. The vegetative reproductive structures soredia and isidia are absent in this species, however, apothecia are usually present. ----The outer "skin" of the lichen, the cortex, is composed of closely packed fungal hyphae and serves to protect the thallus from water loss due to evaporation as well as harmful effects of high levels of irradiation. In Xanthoria parietina, the thickness of the thalli is known to vary depending on the habitat is which it grows. Thalli are much thinner in shady locations than in those exposed to full sunshine; this has the effect of protecting the algae that cannot tolerate high light intensities. The lichen pigment parietin gives this species a deep yellow or orange-red color. ---X. parietina prefers growing on bark and wood; it is found more rarely on rock. Nutrient enrichment by bird droppings enhances the ability of X. parietinato grow on rock ---------Xanthoria parietina is a foliose, or leafy, lichen. It has wide distribution, and many common names such as common orange lichen, yellow scale, maritime sunburst lichen and shore lichen. It can be found near the shore on rocks or walls (hence the epithet parietina meaning "on walls"), and also on inland rocks, walls, or tree bark. It was chosen as a model organism for genomic sequencing (planned in 2006) by the US Department of Energy Joint Genome Institute (JGI). In the past it was used as a remedy for jaundice because of its yellow color -----Medicinal properties: The water extract of X. parietina has good antiviral activity in vitro, inhibiting the replication of human parainfluenza virus type 2 ---- at one picture is next to the yellow lichen also a blue-green lichen, i'm not sure, but i suspect it is another species . I have seen it outside and at other picture on the net. Those 2 species are often found together. (here, from me at least)

thanks, i like this particular lichen so much. a canot stop shoting them. I love the shape and colors

I cannot stop looking at these photos, they so interesting. Great shot.