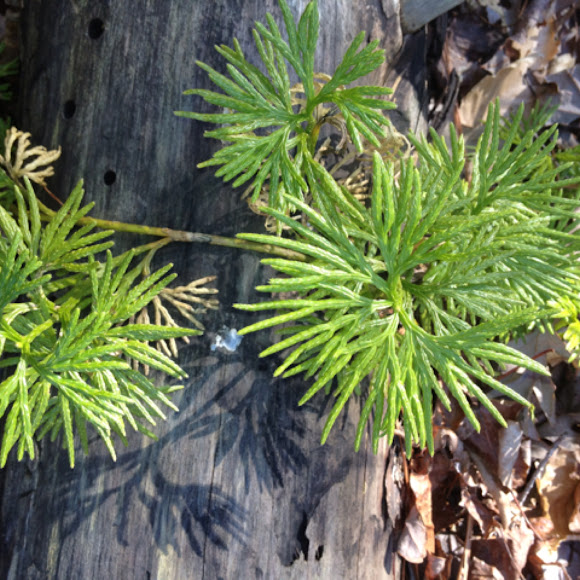 Diphasiastrum digitatum is known as Groundcedar or Crowsfoot, along with other members of its genus, but the common name Fan Clubmoss can be used to refer to it specifically. It is the most common species of Diphasiastrum in North America. It is a type of plant known as a clubmoss, which is within one of the three main divisions of living vascular plants. It was formerly included in the superspecies Diphasiastrum complanatum. For many years, this species was known as Lycopodium flabelliforme or Lycopodium digitatum. Its common name is due to its resemblance to cedar boughs lying on the ground. Its leaves are scale-like and appressed, like a mature cedar, and it is glossy and evergreen. It normally grows to a height of about four inches (10 cm), with the spore-bearing strobili held higher. This plant was once widely harvested and sold as Christmas greenery, and populations were widely depleted for this reason. However, it has greatly recovered throughout its range, and makes large clonal colonies, carpeting the forest floor. It prefers disturbed areas and coniferous forest, where it makes dense monocultures. The subterranean, brown gametophytes may live for years in the soil before sending forth vegetative shoots. In the Appalachain Mountains of Southwest, Virginia the plant is known locally as "Bear's Paw".

Scott
Thank you. I have updated.

Can someone please help ID this plant or give me some ideas where to start looking?