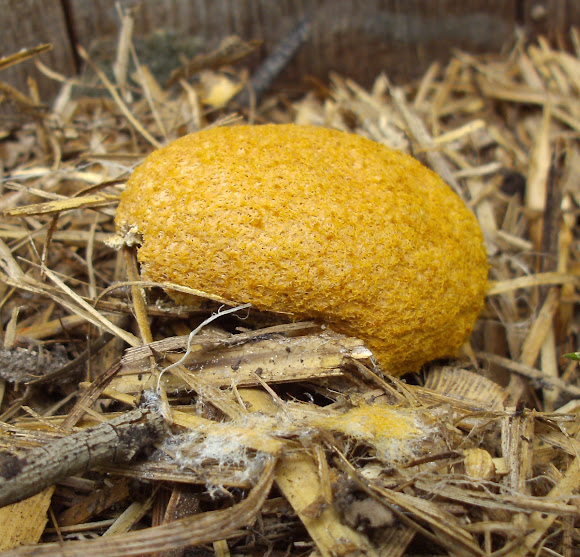 A bright yellow ochre-coloured rounded lump about 7 cms long. The outside was crusty like that of baked bread. However, the crust was thin (1mm thick) as can be seen in pic #3. The crust was extremely brittle and broke off at the gentlest touch to reveal a thick and semi-firm creamy white foam, a little like squashed inside of baked bread. Pic # 4 taken about three days later shows the exposed inside of this mold. It had turned grey-black and powdery within hours of exposure. The crust retained its colour for at least two days.

This mold was seen on a bed of sugar cane mulch in our vegetable patch.

This mold appeared all of a sudden. White hyphae-like webbing can be seen around this mold. Some little creature had tried nibbling at it !. So pleased to have seen on of these... For a closer look under a microscope look here http://www.projectnoah.org/spottings/879...

After all that I will just keep in mind that it's safe (in case of emergency)
Interesting read thanks Clive. The 'sudden' appearance is really fascinating. We had to keep checking each other to ensure it wasn't a 'setup'.

Thanks Clive !. I was going to say to Argybee that the mold was the only thing that I could have picked from that patch of vegies - all the rest (cabbages) were destroyed by common cabbage whites !!

I agree -it's got an awful common name. Mine looked like a baked "Pane di Casa" - nothing like scrambled egg. It was well formed.

Such a charming name!

Please don't pick this with the vegies. :)