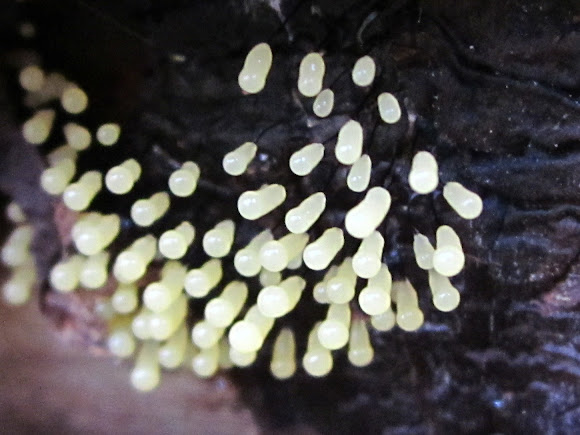 Plasmodium translucent white. Sporocarps scattered or in small groups, up to 9 mm tall, though smaller and always ± spherical in moist-chambers. Stalk usually at least 66% of the total height, black, consisting of netted fibres at least at the base. Columella reaching at least half way up the sporotheca but usually almost reaching the apex, where it merges into the capillitium. Capillitium forming a dense internal flexuose net with the main branches connected to the columella along its whole length, often forming a surface net in the basal part, around the top usually with loops and free ends. Spores lilac-brown, with a small, pale, rounded germination pore, verruculose, 7.5-9.0 µm diam. ( http://www.discoverlife.org/mp/20q?searc... )

Slime mold or mould is a broad term describing protists that use spores to reproduce. Slime molds were formerly classified as fungi, but are no longer considered part of this kingdom. Their common name refers to part of some of these organisms' life cycles where they can appear as gelatinous "slime". This is mostly seen with the myxomycetes, which are the only macroscopic slime molds. Slime molds have been found all over the world and feed on microorganisms that live in any type of dead plant material. For this reason, these organisms are usually found in soil, lawns, and on the forest floor, commonly on deciduous logs. However, in tropical areas they are also common on inflorescences, fruits and in aerial situations (e.g., in the canopy of trees) and also grow in air conditioners, especially when the drain is blocked. In urban areas, they are found on mulch or even in the leaf mold in gutters. One of the most commonly encountered slime molds is the yellow Physarum polycephalum, found both in nature in forests in temperate zones, as well as in classrooms and laboratories. Most slime molds are smaller than a few centimeters, but some species may reach sizes of up to several square meters and masses of up to 30 grams. Many have striking colours such as yellow, brown and white ( http://en.wikipedia.org/wiki/Slime_mold ) -------- Taxonomic position: Kingdom: Myxobiontes Subkingdom: Myxomycetobionti Phylum: Physarophyles Class: Physariodes Order: Trichiales Family: Trichiaceae Species: Comatricha nigra ( http://sanamyan.com/myxomycetes/comatric... )