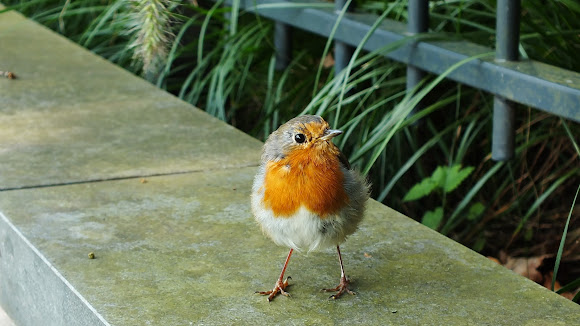 The robin is a plump bird with bright orange-red breast, face, throat and cheeks edged with grey, a white belly and olive-brown upper parts. The sexes are very similar, if not identical, though some texts suggest that the brown forehead is V-shaped in females, and U-shaped in males, though even this is not always apparent. They have a brown bill and legs. The juvenile robin has speckled buff-brown upper parts and underparts. They have no red feathers so that adult birds do not attack them in territorial disputes. The speckled feathers are lost in a partial moult when the bird is about two to three months old.

Robins can easily be found in open woodland areas as well as urban and suburban parks, gardens and backyards. This is one of the most common garden birds in Europe, with year-round populations found in much of western Europe as well as the British Isles. Summer populations extend as far north as Scandinavia and west through much of northern Europe, while winter migrants may visit the edge of northern Africa and the Middle East.

Isn't everything bigger in America :) The bravery of the Robin make up for its size though.

Makes me a little homesick. This is what I grew up knowing a Robin to look like! The American Robin is huge by comparisson

Sweet indeed, and I love their cheeky attitudes :]

Sweet! I was just hearing one singing in our backyard a few minutes ago :-)