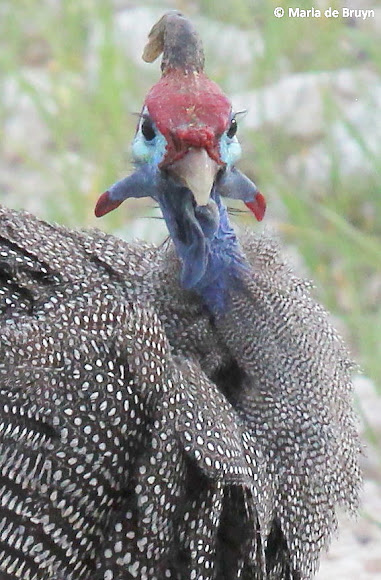 These birds are terrestrial, and prone to run rather than fly when alarmed. They have a short-lived explosive flight and rely on gliding to cover extended distances; they are great runners, and can walk 10 km and more in a day. However, as many as 2,000 have been found roosting together in a tree. They eat seeds, fruit, greens, snails, spiders, worms, insects including many ticks, frogs, lizards, small snakes and small mammals. Males often show aggression towards each other, and will partake in ravenous fighting which will leave other males bloodied and otherwise injured. Attempts at making themselves look fearsome is when their wings raise upwards from their sides and feathers bristle across the length of the body, or they may also rush forwards with a gaping bea

Found mainly in sub-Saharan Africa, but also other countries. Breeds in savannas and farmlands with shrubs and trees.

What a great close-up study of guinea fowls!

Thanks, Alice. It does have an unusual head, Karen; love their feathers,

What a curious looking bird!