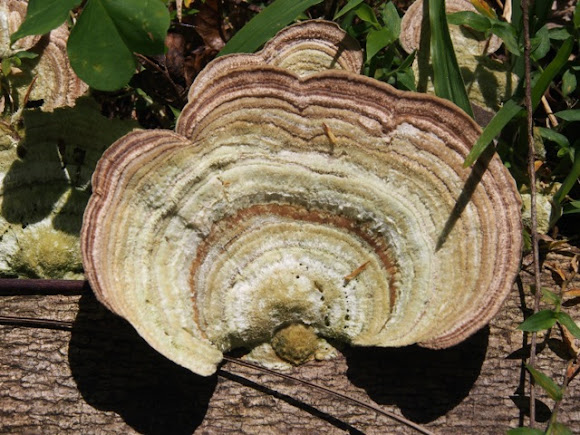 Growing on an old tree branch on the ground. See last photo. Trametes versicolor – also known as Coriolus versicolor and Polyporus versicolor – is a common polypore mushroom found throughout the world.

Chinese and Japanese have used this mushroom for its medicinal properties for a long time. The cap of the mushroom is thick and feels like leather. A promising clinical study shows that the turkey tail mushroom (Trametes versicolor) improves the immune systems of breast cancer patients. The multiyear study, funded by the National Institutes of Health (NIH), tracked whether or not turkey tails could positively affect the immune system of patients rebound after they ended their radiation therapy. Traditionally, our ancestors boiled mushrooms in water to make a soothing tea. http://www.huffingtonpost.com/paul-stame...

Its excellent you had a photo of the underside , when it has pores it's trametes and if it is smooth and no spores it will be most often stereum ostrea in your area. :)