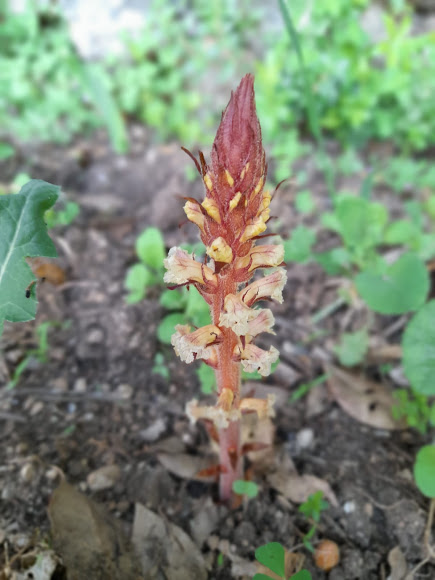 Attn - this spotting is dedicated to my nephew, Sven, who is the author of pictures and spotted five of these beauties. These are red-brownish shoots, about 20-25cm tall. Shots sport rose-whitish discreet but attractive flowers, arranged in a terminal spike and yellow while in buds. Broomrapes bear no leaves and produce no chlorophylle, and are dependent on other plants for nutrients. Their seeds would remain dormant in the soil, until stimulated to germinate - once seedlings start to germinate, they will produce a root-like organs and attach themselves to a root of nearby hosts. Once attached, the broomrape robs its host of water and nutrients.

Sven found five shoots growing on one of the terrasses in our garden - the terrace itself was previously a dump for stones and rocks and now contains a very shallow layer of topsoil. The garden itself is a typical Mediterranean garden, terraced and covered in Mediterranean fruit trees and mainly spontaneous plants, most of them melliferous. The garden is located in urban environment, at outskirts of Dubrovnik, on lower slopes of Srdj mountain.

1) As mentioned above, all credits for this spotting go to my nephew Sven, who, while observing our garden came up with these pics and observations. 2) It's a difficult business to come up with a full ID of the species based on pictures and external appearances - many of species look alike; but also many of species can take a very different appearances. With this one here, I came up with three possibilities - but am pretty sure more of them would be plausible candidates if I pursued... So the three in question are Orobanche minor, (Hellroot - a very common one and found on variety of hosts), Orobanche alba, found on thyme; and then Orobanche artemisiae-campestris, found on members of daisy family.